POOPER:
Tucker wins his court case, but his company goes out of business.  Of the 50 cars he produced, 46 of them are still driveable today.

LONG VERSION:
Preston Tucker (Jeff Bridges) has always been interested in building automobiles.  During WWII, he made his money by building armored cars for the Army and gun turrets for the Air Force.  After the war, he turns his attention to finally making the car of tomorrow.  He calls it the Tucker Torpedo, and it will feature many state-of-the-art safety features, such as an air-cooled rear engine, pop-out windshields, seat belts, and a center headlight that swivels when the car turns. He hires designer Alex Tremulis (Elias Koteas) to help iron out the design of the Torpedo, and New York financier Abe Karatz (Martin Landau) to help with the financial support to get his new car company off the ground.  To give the company credibility, Karatz convinces Tucker to also hire R.J. Bennington (Dean Goodman), the former head of Plymouth, to be the CEO of the Tucker Corporation.  Karatz and Tucker raise money for the company through a stock sale and selling dealerships and as a result, the Tucker Corporation is able to acquire a former B-29 plant in Chicago to assemble the Torpedoes.

After several setbacks, the prototype of the Torpedo is finally revealed, and the reaction from the public is terrific.  As orders are coming in for the Torpedo, the Board of Directors are concerned that Tucker won’t be able to overcome the many technical and financial obstacles that are facing him.  After sending Tucker on a cross-country tour to promote the Torpedo, Bennington begins to make changes to the car so that the company can keep up with the Big Three Automakers in Detroit.  These changes would strip away many of the safety features, move the engine to the front of the vehicle, and double the price.  Upon hearing of the changes, Tucker cuts short the tour and confronts Bennington.  However, due to Bennington’s contract, he has complete control of the company and the car’s design, so there isn’t much Tucker can do.  Despite the changes Bennington and the board has made, Tucker orders his engineers to build the vehicle to the original specifications.

While all this is happening, the Big Three begin to use their influence on Senator Homer Ferguson (Lloyd Bridges, Jeff’s real-life father) to have him make things difficult for the Tucker Corporation.  First, he prevents a sale of steel to Tucker, forcing him to find another supplier at a higher price.  He then gets the SEC to begin an investigation into the stock sale, claiming it was nothing more than a way to scam the public.  This forces Karatz, who was once convicted of bank fraud, to resign so as to not taint the company.  Finally, he and the SEC feed false stories to the newspapers, claiming the Torpedo is a piece of junk.  With Tucker’s reputation plummeting, the SEC finally arrests Tucker for stock fraud, even though 50 cars have already been produced.  As a result of the arrest, Bennington and the entire Board of Directors resign.

Just as his trial is beginning, Tucker learns that the government has repossessed the factory, essentially putting the company out of business.  During the trial, Tucker’s lawyer tells the jury how the government has it out for Tucker, showing how they were planting stories to the newspapers and stonewalling Tucker in several ways.  The trial concludes with Tucker himself giving the closing arguments.  He tells the jury that the prosecution is trying to show that he had no intention of ever making a car.  All the jury has to do is look out the window to see the 50 cars his company has made and the case is over, but the judge refuses to let them do so.  He then gives an impassioned speech about how capitalism is ruined by big corporations trying to drive the little guy out of business.  The jury quickly returns a verdict of not guilty, and Tucker celebrates by letting all the jurors drive the Torpedoes.

The movie ends with title cards saying that of the 50 Tucker Torpedoes made, 46 of them were still driveable today.  Many of the safety innovations that Tucker came up with, such as the seat belt, were eventually adopted by the Big Three and are still used today.  Preston Tucker died six years later at the age of 53. 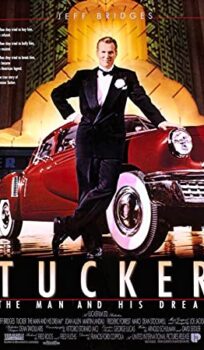