Short Version:
The kid destroys Zeus and in the process discovers the pure water source.  However, Apple is killed in the process when she protects him from an explosion.  Turbo Kid buries her in the spot where they first met.  He and Frederic part ways because Turbo Kid wants to see the rest of the wasteland.

Long Version:
The Kid (Munro Chambers) lives in a post-apocalyptic world of 1997.  Nuclear war and acid rain have left the world barren and most all water undrinkable.

The Kid scavenges alone for items he can trade for drinkable water and Turbo Rider comic books, his favorite.

One day he is befriended by an overly enthusiastic girl named Apple (Laurence Leboeuf) who he decides to let tag along and teaches her how to survive in the wasteland.  They are attacked, and Apple is kidnapped by a henchman of Zeus (Michael Ironside) who tyrannically rules over the wasteland in a quest to find the pure water source and who is the one who killed The Kid’s parents which we are shown in a series of flashbacks. While evading the henchman, the Kid stumbles upon what appears to be a crashed spacecraft where he finds the real Turbo Rider dead.  He takes his costume and Turbo Glove and sets out to rescue Apple.  He comes to Zeus’s headquarters where Apple and another man named Frederic (Aaron Jeffery) are put into a empty pool turned battle pit to fight to the death.  The Kid tries to save them but is thrown in the pit as well.  They band together to fight and defeat everyone in the pool and escape, however Apple is shot and it is revealed she is a robot.  She is a friendship companion robot and now has damaged parts which are causing her power to drain fast.  The Kid spots a merchant he has done trading with who tells him where a robot graveyard is: he can go to salvage parts for her.

On the way to the graveyard, he is attacked by more of Zeus’s henchman including Zeus’s right-hand man, Skeletron (Edwin Wright) and Apple’s head is cut off.  The kid escapes with her head and gets to the graveyard and attaches it to a random robot body but is quickly overtaken by toxic gas.  He wakes up a while later to find he has been rescued by Frederic, the tough cowboy-esque man from the Pool Pit.  He said Apple didn’t make it and the two of them decide to set out and end Zeus once and for all.  They meet up with Zeus and his army in a large quarry and the battle begins.  Frederic’s plan is to blow Zeus up with a homemade bomb but during the fight the bomb ends up being a dud.  Kid and Frederic kill most of the henchman, but they eventually get beat down and Frederic is shot.  When all seems lost, Apple shows up, fully functioning and helps save Kid.  The Kid uses his Turbo glove to take out the remaining henchman and Zeus as well.  It appears they have won until Zeus gets back up and reveals he is robot, a corporate companion robot who was designed to develop and integrate corporate policies and views humans as inefficient and more like cockroaches. Zeus begins to use a death/electric ray to kill Kid and Apple, but the ray ends up supercharging Kid’s Turbo Glove and he uses it to blast the dud bomb which was right next to Zeus.  The bomb explodes killing Zeus and opening up the ground to reveal a massive geyser of fresh water (the pure water source).  However, Apple used her own body to shield Kid from the massive blast sacrificing herself.

In the closing scene, we see the Kid finishing a burial spot for Apple in the place where they first met.  Frederic, who did not end up dying, is with him and tells him he did the right thing by letting her rest in peace.  The pair part ways as The Kid decides he wants to set out and see the rest of the wasteland and effectively become a superhero to world just like Turbo Rider.  We then get a shot of Turbo Kid riding off to the horizon and the credits begin to roll. 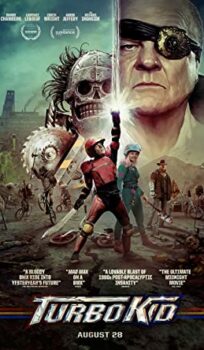