Turbo (Ryan Reynolds) is leading the Indy 500 with just one lap to go. As he nears the finish line, French-Canadian racer Guy Gagne causes a huge multi-car crash, just as Turbo is losing his super speed and other powers. Turbo lands about 10 feet from the finish line, but since his shell is cracked and he no longer has super speed, he becomes discouraged, and curls up into his shell.

Turbo’s brother Chet (Paul Giamatti) hurries to Turbo’s side, first on a helium balloon, and later riding on the back of a crow. He urges Turbo not to give up, and to make it to the finish line on his own. Turbo begins crawling to the fibish line at ordinary snail speed.

Guy Gagne sees Turbo heading closer to victory, and starts dragging his wrecked car to the finish line. As he gets close he tries to step on Turbo to keep him from winning. Chet yells, “Tuck and roll,” and Turbo curls up in his shell and rolls over the finish line.

Tito and Angelo use the prize money to renovate the Dos Bros taco restaurant and the entire strip mall. Soon, business is booming at all their shops.  As the movie close, all the other snails have snazzy shells and special propulsion gear. Tito gets a new shell for Turbo, but sees that the old shell has healed. And just as a new race is about to start, it looks as if Turbo’s super speed has returned. 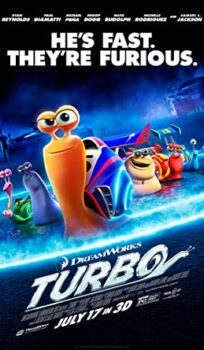