Of the entire group, only Pru (Melissa George) and the siblings -Alex (Josh Duhamel) and Bea (Olivia Wilde)- survive.  Also, most of the bad guys get gruesomely killed.  Our three survivors have a final confrontation with Zamora (Miguel Lunardi) and the Indian guy inside the cave where Kiko (Agles Steib) originally took them all.  Alex nearly crushes Zamora’s head with a rock, before Bea sets them apart; then, the Indian with the rifle comes along, and a badly injured Zamora talks him into killing them all, while Pru tries to convince him otherwise.  The Indian realizes Zamora is evil and puts him out for good, thus letting the good guys go.

They find a family of locals who feed them, take care of them, and, in the end, they all take a plane to leave.  Before riding it, Alex overhears a couple debating about either taking a plane or a bus to move about the country; Alex advises them:  “Take a plane”. 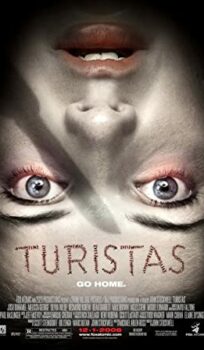