35 years ago scientists came up with a method to extract the best DNA from 6 ideal men to create a perfect embryo who will have the best genes for athletics, intellect, virtue etc…  When the baby is born, they are surprised that the process created a twin with all the worst genes.  The perfect child, Julius, is raised by scientists to excel in every field.  The bad DNA child, Vincent, is dumped in an orphanage.

35 years later, and adult Julius (Arnold Schwarzenneger) is first told of a twin brother.  He immediately goes to search for his twin.  He finds Vincent (Danny DeVito) in jail and bails him out.  Vincent thinks Julius is crazy and tries to escape from him.  Vincent owes money to gangsters who send their muscle to beat Vincent.  When Julius easily trounces the tough guys, Vincent decides it is worth keeping him around.

Vincent makes a living stealing cars.  He steals a Cadillac, from industrial spies, with a secret new jet fuel system in the trunk.  A criminal named Webster was supposed to deliver it to a competing company for $5million.  Vincent wants to go alone to deliver it for the money.  Julius tags along to try and find their mother.  Vincent’s girlfriend Linda and her sister Marnie (Kelly Preston) also hop in the car for the road trip.

They stop at Los Alamos and talk with the scientist in charge of their birth.  Vincent is shocked to learn they are really twins, and devastated that he is the combination of all the worst genes.  They get the address of their mother, who was a wealthy artist.  When they get to their mother’s house, they are told their mother died.  Their mother thinks they are scam artists after her money.

Vincent is so upset, he abandons the others at a rest stop and goes to deliver the jet fuel injector alone.  He gets the briefcase with $5 million in cash, but Webster shows up to kill him and recover the money.  Julius has followed.  They knock out Webster and leave with the cash.

Flash forward to Julius and Vincent working together as consultants.  Vincent complains about Julius making him return the $4million (implying that Vincent deceived Julius and kept a million).  Their mother sees a newspaper article about the twins who first met at age 35 and returned the millions.  She realizes they are her sons, and reunites with them.  The scientists had lied to her and told her the baby died at birth, so she would not interfere with them raising Julius the way they wanted.  We then see Julius and Vincent with their wives, Linda and Marnie, and each couple has twin babies. 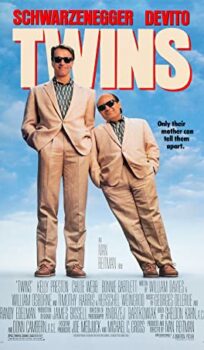