While with Liz (Daryl Hannah) under his “Bart” identity, Art (Antonio Banderas) rediscovers his passion for painting, and he falls for Liz and eventually sleeps with her. However, the night before Art is to get hitched with Betty (Melanie Griffith), Gene (Danny Aiello) and his henchmen track him down to Manny’s (Gabino Diego) art studio, where he is spending the night after having earlier outrun the henchmen with help from his father Sheldon (Eli Wallach). After he sustains a brief beating from them, Art shows Gene a plane ticket to Puerto Vallarta that he purchased and tells him that he plans to go there on vacation and stand Betty up at the altar, after which Betty will be all his. Gene responds by ripping up the ticket and then telling Art that all he cares about is Betty’s happiness, which is why he WILL marry her tomorrow as scheduled, and he warns him that he will inflict terrible pain on him if he hurts her. Shortly after Gene and company leave, Liz comes by and sees Art on the floor in pain and believes that Bart got beaten up, and Art tells her that he is Bart and he is in love with her. However, Liz believes that Art is hitting on her and accuses him of betraying his “brother” and her sister, then departs.

At Betty’s house the next day, Liz tells “Bart” that his “brother” told her last night that he loved her, and they can’t let him marry Betty. “Bart” agrees and tells her to inform Betty about what Art did, so she does, but Betty doesn’t believe her. Liz then finds Art and has him wait in the study, saying that “Bart” wants to talk to him about last night. Art leaves through the window and meets Liz as Bart, and she tells him that he must convince Art to call off the wedding because Betty won’t listen to her. She directs him to the study, and she watches from the door as Art paces back and forth, switching between himself and “Bart” out of her view to fool her, and has a brief argument with “Bart” where “Bart” basically tells him that he is making a huge mistake marrying Betty and will only make her miserable. However, he is unaware that Betty is listening in over the phone, having called a maid on it moments ago and the maid mistakenly leaving the receiver off the hook. Just as Art makes it out to look like “Bart” has left out the door leading to the pool area, Gene – having also been watching with Liz – enters and again warns Art that he’d better go through with the nuptials. Art tells Gene that he is clearly the one in love with Betty and it makes no sense for him to be the one to marry her, but Gene replies that the only thing that matters here is what Betty wants. He then says some more things pertaining to his devotion to and love for Betty, and he has no idea that she has heard everything he said.

Once Art and Betty are at the altar, Betty decides that she can’t wed Art, having been too deeply touched by Gene’s words, and she goes up to Gene and tells him she loves him before they kiss and leave together. Liz then notices her dog coming up to Art and wanting to play fetch with him, which is something “Bart” did with the dog, and this helps her to realize that Art and Bart are the same guy. Art notices the heartbroken Liz going back inside the house, so he finds her and talks to her as Bart, where he makes up an excuse about having to return to Italy and apologizes for taking off on her. Liz plays along with the charade, wishing him well and telling him to give Art her love, but he says that Art is not good enough for her, and neither is he.

Sometime later, Art switches from owning his art gallery to being its artist, and his receptionist Gloria (Joan Cusack) has become the owner and manager, and the place is doing fantastic business. During one of Art’s exhibitions, Gloria points out that Liz is among the attendees, so he goes to talk to her. He apologizes for lying, but she argues with him over who he really is. He eventually asks her who she wants him to be, and she kisses him in response. He throws away the glasses he used as “Bart” and kisses her in return, and she asks if that was Art or Bart, and he says it is just him. They kiss again and go for a walk together. 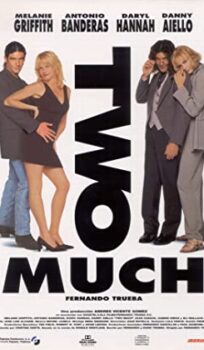