Marshall McCabe (Jimmy Stewart) is sent out to recover settlers that are held by captive by the Comanches.

Marty (Shirley Jones) hopes he can find her young brother.  McCabe warns her that the brother was so young when he was abducted, he will not remember her.  McCabe finds 4 captives. Two of them refuse to return with him (a lady who has married a Comanche and has children with him, and an old lady who says she is practically dead already).  A young man, called Running Wolf by the Comanches, is thought to be the son of a rich settler. He is forced to return against his will.  A mexican lady named Elena also returns with McCabe.

Running Wolf is not the rich man’s son.  When a lady tries to cut Running Wolf’s hair, he kills the lady.  He is to be hanged.  They realize Running Wolf is Marty’s brother, but can not save him.  Marty realizes nothing could have brought back the brother she remembers.  Marty agrees to marry Lt. Gray, McCabe’s 2nd in command.  (Richard Widmark).

Elena is shunned by the settlers because of her past with the Comanches.  She decides to move on to California.  McCabe has fallen in love with her.  He decides to go there with her. 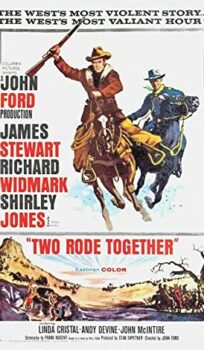