The weapon that Violet (Milla Jovovich) turns out intercepting is in fact not a gun, but a child.  This forces her to turn against her vampiric kind while still battling the human corporation that owned the child, led by Daxus (Nick Chinlund)

Throughout the battles that occur, Violet discovers that the kid is dying from some kind of human gene that supposedly had a cure for her (she’s dying as well).  It’s then revealed that the kid is actually a clone of Daxus, project “six of eight”.  She attempts to return the kid after rescuing him from her former group (in which she tears apart with her sword), but finds a trap by Daxus set with a bunch of gunmen.  She avoids it by using a hologram, but they eventually capture the kid after he dies.

Violet is revived by her friend Garth (William Fichtner) and she proceeds to the headquarters, tearing apart wave after wave of soldiers and eventually getting to Daxus, who reveals he has some vampiric powers of his own as he kills the light in the room.  This leads to a big swordfight with enflamed blades, but Violet eventually gets the edge and slices Daxus to pieces as he’s set on fire.

Violet then takes Six to the roof, and he’s somehow revived.  However, she collapses, as if she’s dying.  Six insists otherwise, and tells Violet to get up.  The last scene is the corporation headquarters exploding as Violet and Six ride away in Garth’s van, with Violet warning future troublemakers that she’s still around. 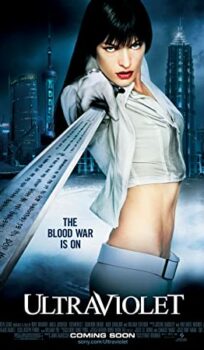