Louie Zamperini (Jack O’Connell) is an Italian-American who spends his childhood as an Olympic track star, and his young adulthood serving in the Army Air Forces in World War II.

Louie survives a harrowing 47 days at sea after his plane is shot down, only saved when discovered by the Japanese.  He is taken to a Prisoner of War camp where he is singled out by a sadistic militant, aka The Bird (Takamasa Ishihara) who abuses him repeatedly.

He survives for two and a half years, finally being freed when the war ends.

End credits tells us that the Japanese were held accountable for war crimes, but eventually the charges were dropped to assure good relations with the Japanese.  Louie kept his promise to obey God and remained religious throughout his life. 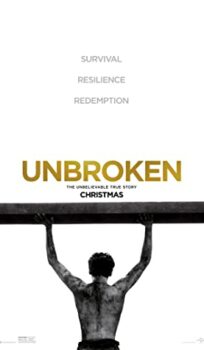