After a strange introduction where a nameless character of unknown origin (played by Scarlett Johansson) is learning to speak, a mysterious biker is shown hauling a dead, female body up a hill into a van. Inside, in what seems like an infinite white space, Scarlett’s emotionless character (who I’ll call She) takes the clothes from the dead victim and leaves.

She begins to drive around Scotland surveying the people, with intent focus on single males. She manages to lure one man home for sex, but upon entering her home, the man is engulfed by what seems to be an endless black pool.

She continues to survey Scotland. Upon a secluded beach, she spots a a couple who are pulled out to sea and presumably killed, leaving behind their child. She also kills a swimmer with a rock who was injured trying the save the couple. Another mysterious biker arrives at the scene and removes the evidence.

At a traffic stop, a stranger gives She a rose, which prompts a flitter of confusion and intrigue. She then follows a stranger to a club and takes him home. Like the previous victim, he’s lured into the black pool. Inside, the victim sees another trapped male, who’s body suddenly implodes, leaving behind only skin.

Driving at night, she spots a severely deformed young man, who she surprisingly shows affection towards, seemingly oblivious to his facial deformity. She takes him home, but rather than let him die, she lets him go. Even though he’s free, another mysterious biker finds him and takes him away.

It is implied that these mysterious bikers are handlers of some sort, and they require She to capture and kill these males, which She is beginning to deviate from. This prompts the bikers to split up and try to find her since she is no longer doing her job.

She finds a stranger on a bus, who seems concerned about her nervous demeanor. The stranger takes her home and provides her shelter. She begins to feel more compassion and less detachment than before. Eventually, they have sex, the sensation of which shocks She, who leaves soon after.

She finds a forested, snowy area, where she crosses path with a seemingly innocent man walking a trail. After finding shelter and napping, she awakes to that same man molesting her. The man chases her and attempts to rape her, but notices black blood and loose skin and runs off. She begins to take off her skin, revealing a bald, black-skinned humanoid. The rapist returns with fuel and lights her on fire. She runs off and eventually dies. Presumably, the dead woman at the beginning was another alien who also died, after becoming sidetracked from her objective and beginning to feel emotion. 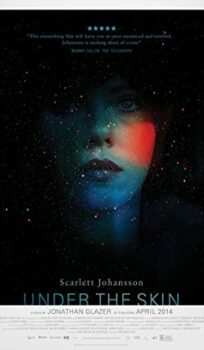