As the movie starts we see scenes of a “Great Purge”, where humans discover the existence of Vampires and Lycans. There is a war where most of both species are wiped out and a vaccine is developed by the Antigen Corporation to keep ordinary humans from turning into Vampires or Lycans.

Dr. Jacob Lane (Stephen Rea) of the Antigen Corporation is a Lycan. He has frozen Michael and Selene (Kate Beckinsale) and has kept Selene’s daughter, Eve (India Eisley) in captivity until Eve can reach puberty where she can breed with Uber-Lycan Quint (Kris Holden-Reid). Dr. Lane wants to create Lycans that are immune to silver and with fast-healing capability, so he has been injecting Quint with serum taken from Eve.

Eve releases Selene and with the help of sympathetic detective, Sebastian (Michael Ealy) and vampire, David (Theo James) they invade the Antigen Corporation, release Michael from hibernation, Eve kills Lane and Selene kills Quint by shoving a silver nitrate grenade into Quint’s stomach. (Quint instantly heals which traps the grenade in his body and when it explodes, so does he.) Michael escapes and Eve can see through his eyes. The film essentially stops with Selene vowing to find Michael and reclaim the world from humans.

This weaker entry in the series also includes a huge battle where an entire Vampire coven ruled by Thomas (Charles Dance, slumming) is wiped out by Lycans; Selene raising David from the dead by mixing her blood with his heart; there’s a car chase with Lycans jumping on the top of taxi cabs and since Scott Speedman wouldn’t reprise his role as Michael, some mediocre CGI face-swapping. (Hopefully, they’ll improve the script if they make an Underworld 5….) 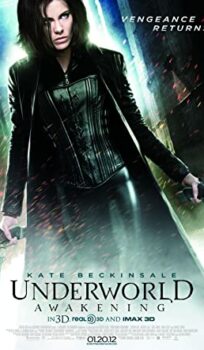