The monster killing everybody is thought to be some alien that came down hundreds of years ago and is collecting DNA. The natives lived in peace with the creature 900 years ago, but something happened and the thing started killing them. So they crushed some herbs up and made a poison that “killed” the creature until the archaeologist unearthed it.

They try recreating the poison, but it doesn’t work. They figure out the herbs weren’t the only thing in the poison. They used rocks that were saturated with uranium and the radiation is what made the poison effective. They extract some uranium and mix it in a large syringe with the poison.

While trying to stab the creature with it, Kale dies and Annie is wounded. As the creature stands over her ready to bite her, she injects the poison into her neck and kills herself. The thing bites her and dies.

The two survivors, Ally and Caya, pack the bodies into the only working vehicle and drive away leaving the thing in the dust. 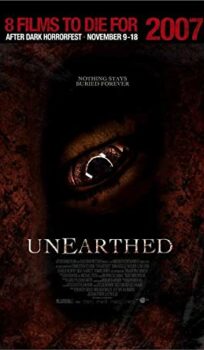