Dr Martin Harris (Liam Neeson) is traveling to Berlin with his wife Elizabeth (January Jones) for a bio-medical conference. Dr Harris is scheduled to give a presentation about his research as part of the event. After taking a taxi from the airport to their hotel, Dr Harris realizes that his briefcase was left behind at the terminal. While his wife checks in at the reservation desk, he hails another cab and goes back to the airport to retrieve it. During the trip, the taxi driver swerves to avoid an accident but drives off the road into a canal. Harris suffers a blow to the head during the crash and has to be pulled from the submerged vehicle by the taxi driver. His heart stops for several minutes but paramedics are able to revive him.

Harris awakens in the hospital to discover that he has been in a coma for four days. Frantic at the thought that his wife doesn’t know where he is, he checks himself out against the advice of the attending physician. Harris goes to his hotel and catches a glimpse of his wife entering the ballroom for a dinner party. When Harris approaches her, she denies knowing him and insists that he is not her husband. Another man (Aiden Quinn) then appears at Elizabeth’s side claiming to be the real Dr Martin Harris. He has proper identification and even candid photos of himself with Elizabeth. After police and security guards remove him from the party, Martin watches as an Internet search turns up several pages which seem to indicate that the other man is the real Martin Harris.

A combination of clues and regained memories eventually leads Martin to the truth behind his current situation. There is no Dr Martin Harris. Martin and Elizabeth are part of a group of assassins-for-hire. They were using the phony “Dr and Mrs Harris” identities in order to get into the conference to steal valuable research from one of the other participants. When Martin went missing after the car accident, another member of the team stepped in and assumed the “Dr Harris” role in order to complete the assignment. “Dr and Mrs Harris” are going to steal Dr Bessler’s research on a groundbreaking new strain of corn and kill him in a phony terrorist attack.

Martin is so horrified by the realization of what he and his teammates planned to do that he decides to stop them. He goes to the hotel security office and warns them about the bomb that is planted in one of the suites. As guests are evacuated from the hotel, Martin confronts the other Dr Harris. While the two men are fighting, the bomb goes off. Elizabeth is killed in the explosion and a significant portion of the hotel is damaged. Martin is eventually able to kill the other “Dr Harris”.

At a press conference several days later, Dr Bessler announces that he will not patent his valuable research but will instead share it with the world in hopes of wiping out hunger. A news report indicates that this announcement has caused agri-business stocks to plummet (suggesting that it was one of those businesses that hired Martin and his team to steal the research). Martin and the taxi driver who helped him use the fake IDs and currency that were inside his missing briefcase to begin new lives. 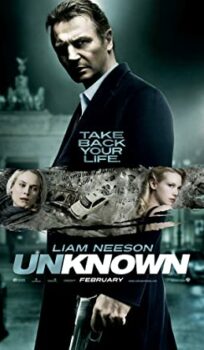