Officer Davis’ (Ray Liotta) fixation on Karen (Madeleine Stowe) causes him to begin corrupting Michael (Kurt Russell). When his partner, Cole, confronts him about it, David creates a setup in which he shoots and kills Cole, but makes it look like his street informant did it. He also sets up and has Michael arrested for drug possession.

While Michael is incarcerated, Davis makes his move, killing Karen’s best friend so he can be alone with her. Karen realizes what he has done and resists his sexual advance.

Michael breaks into the house, defends Karen, and kills Davis with his own gun. 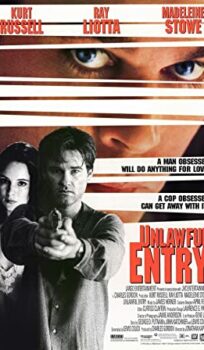