Short version:
The person responsible is Owen Riley (Joseph Cross), who a few months earlier had his father commit suicide. The video of his fathers death was made public and used on shock sites. This infuriated Owen, who captures and tortures the people responsible for the videos’ release intending to make their deaths a trivial internet video as well. He is stopped and shot to death by Jennifer (Diane Lane), but it’s too late – all the people he tortured already have their videos online and spread world wide.

Long Version:
All the people being tortured are connected through James Riley, a hematologist at a local college, who decides to kill himself over losing his wife. The first victim, Herbert Miller, was the pilot of the helicopter that caught all the footage of James killing himself. He was the only pilot to be there at the right time. James’ body fell off the bridge when he shot himself, falling ontop of a diner. His glasses fall off, and are collected by Scotty Hillman who sold them online for a large amount of cash. David Williams is rushed to the scene to do a report on the suicide. Andrew takes the video and posts it online and turns it into a shock video website.

Owen Riley is made the prime suspect. Owen is James’ son, who went insane when his father killed himself. The FBI moves in to arrest him. They find out it was him, as they find most of the bodies of the people he has tortured in his basement, but he isn’t there.

Owen manages to capture Jennifer by “hacking into her car’s computer” and shutting it off. He hangs Jennifer upside down and sets up a law mower under her. As viewers tune in, she gets lower and lower, threatening to basically cut her skull into pieces. He starts the live stream, and millions of people start watching.

She starts to swing around back and forth, while Owen follows her with the camera, turns out she’s in her own basement, which one of her fellow FBI agents figures out by watching the scene. She swings over to a fire extinguisher, and blows it in his face, knocking out his vision. She releases the crank holding her up, falls to the ground, and beats Owen. She grabs her gun, and unloads on him, killing him.

In a final act of revenge, Jennifer moves to the camera and holds up her police badge.

The camera scrolls into the chat box that is shown next to the live video, and someone asks “how can I down load this video?” which basically shows that even though Owen was stopped, his job was done – the people who had made his father’s suicide a public internet joke had the same thing done to them. Millions of people worldwide will watch those people be tortu 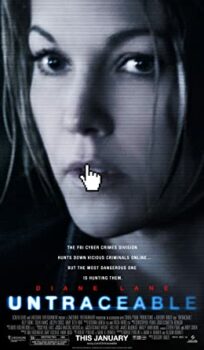