A huge hit that “Catapulted Danny Kaye from a virtual unknown to an international super-star.”

Danny Weems (Danny Kaye) is a hypochondriac elevator operator.  When he gets drafted into the army in WWII, his best friend Joe (Dana Andrews) tries to get him released, but instead Joe ends up drafted alongside him.  Danny is in love with Mary(Constance Dowling), but Virginia (Dinah Shore) is madly in love with Danny.  Mary and Joe fall in love with each other, but do not want to tell Danny.  They think the trauma of getting dumped by Mary, along with being drafted, will be too much for him.

Virginia and Mary enlist in the WACs (Women’s Army Corps).  Danny, Joe and Virginia are supposed to sail on a troop transport.  Danny’s foolish actions get Mary stuck onboard, when it sails.  Danny tries to hide her, but is caught.  Danny also screws up in just about every way imaginable while aboard the ship.

Their ship docks at a pacific island.  Danny is locked in a small jail on the edge of the basis.  Japanese troops are secretly on the island, preparing a surprise attack.  They capture Danny from the jail, trying to get information about troop strength.  Danny refuses to give them any info.  Danny is left alone with their commanding officer interrogating him.  Danny knocks out the officer, takes his clothing and impersonates him.  Acting as the officer, Danny leads all the Japanese troops in surrendering.  Danny is now a hero for single handedly defeating this large force.  Danny realizes Virginia is the one for him, freeing Mary and Joe to be together. 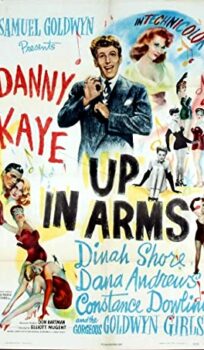