Muntz (Christopher Plummer) has been using the dogs to find the mysterious bird. Dug brings back Kevin, the bird that had been following Russell and Carl. Carl (Edward Asner) sees his childhood hero for the crazy person he has become, and decides to go back to moving his house to the waterfall to fulfill his wife’s dream. Russell goes back to save Kevin.

While sitting where he and his wife Ellie used to sit, Carl looks through her adventure book, and finds a section he hadn’t seen before, which is filled with pictures of the two of them from their childhood, through marriage, up until before she died. It is signed, “Thanks for my greatest adventure. Now go out and have a new one.” So Carl ditches furniture and appliances to allow the balloons to lift his house, which he steers after Muntz’s zeppelin. In the struggle to save Kevin, Dug defeats Alpha, the leader of the dogs, and thus takes his position.

While struggling with Carl, Muntz gets his leg caught in the ropes of some of the balloons attached to the house, and falls to his doom. Carl’s house also begins to slowly plummet back to Paradise Falls. Carl and Russell return Kevin to her babies, and then head home with all of the dogs. Carl presents Russell with his helping the elderly badge, as well as the bottlecap badge Ellie had given him when they first met. 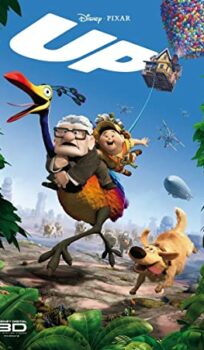