The story takes place in a universe where there are two Earth planets that have ‘dual gravity.’  There are three principles of this gravity: 1-matter is pulled in the gravity direction of whichever world it came from, 2-gravity can be offset with matter from the opposite world, 3-after some time, matter not meant to be in that gravity will burn and disappear.

The two worlds advanced at a different pace, so the one above (Up Above) has riches while the one below (Down Below) is poor and taken advantage of by the Up Above.  The two worlds are not meant to have contact, but Adam Kirk (Jim Sturgess) trekked to a mountain as a boy to gather pollen for his great-aunt Becky (Kate Trotter), who uses it for anti-gravity properties.  While there, he meets Eden Moore (Kristen Dunst), and they start a relationship.

Eventually, Adam and Eden find a way to bring Eden to the Down world.  While having fun in the woods with gravity pulling Eden up and Adam down, the authorities find them.  Adam is lowering Eden to her world Above but gets shot and drops her.  Authorities on Eden’s side find her with blood coming from her head.  The authorities have burned great-aunt Becky’s house and arrested her.

Ten years later, Adam sees Eden on the TV.  He is thrilled and gets a job working at the same company, TransWorld.  The only company which connects both worlds.  Adam befriends Bob Boruchowitz (Timothy Spall), who is from Above.  Bob helps Adam find and connect with Eden.  Eden doesn’t remember because of amnesia.  Adam and Eden have a romantic date in the Above, and Eden is starting to remember.

Adam and Eden meet back at the mountain in their respective worlds.  Authorities intervene and break the lovers up again.  Adam is back in his old life in the Down world.  Eden goes to Bob for help.  Bob perfected Adam’s formula he was working on at TransWorld so that any matter can counter-effect the gravity of either world.  Eden is also with Bob and informs Adam that she is pregnant with twins. 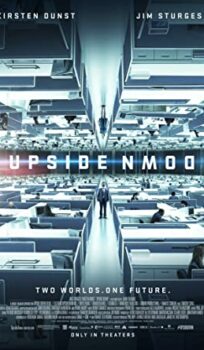