The film is an anthology of 6 found-footage videotapes, each directed by a different filmmaker (and featuring different horror subgenres):

Wrap Around Story: Tape 56 – Adam Wingard
A group of hooligans break into a house to steal a VHS tape.  They find the old man that lives in the house (apparently) dead in a chair.  One-by-one each of the hooligans watch the many tapes they find, only to disappear right afterwards.  It turns out in the end that the old man was still alive (and apparently a zombie of some sort) and has been killing the hooligans one-by-one, ending with the leader (it should be noted that this wrap-around story concludes BEFORE the final segment).

VHS Tape 2: Second Honeymoon – Ti West
A couple goes onto a roadtrip and checks into a hotel.  During the night the guy encounters a strange girl outside of the hotel.  This girl apparently breaks in while the couple are sleeping and steals money and dips the guys toothbrush in the toilet.  The couple doesn’t really notice anything the next day (other than the guy realizing that his money was gone).  The girl apparently returns the next night and slits the guy’s throat and it’s revealed that the girl was the lesbian lover of the guy’s wife.  The final shot is the guy’s wife asking if the girl erased the tape.

VHS Tape 3: Tuesday the 17th – Glenn McQuaid
Four friends travel to a lake by the woods.  The cameraman notices some odd glitches that result in bloody bodies being shown all around.  In addition, the cameraman’s girlfriend strangely says that they were all going to die.  It turns out that the woods was the site of grisly murders and the girl was the only survivor.  The murderer is some sort of ghost that is only seen through camera glitches.  It kills off the three of the friends and girl apparently manages to catch it in a trap.  However, it escapes and kills the girl, with the final shot being the murderer cutting her open and removing her entrails.

VHS Tape 4: The Strange Thing That Happened to Emily When She Was Younger – Joe Swanberg
The entire segment is shown as a series of webcam conversations between Emily and her boyfriend.  Emily is convinced that her apartment is haunted and she also feels a strange lump in her arm, which she at one point tries to dig out with a knife.  It turns out that the “ghosts” are actually aliens and they are using Emily to incubate their offspring.  Her boyfriend was really in the same building and was working in cooperation with the aliens to cut out the offspring when they are ready.  The final twist at the end was that there are more than one girl that the boyfriend is conversing with…

VHS Tape 5: 10/31/98 – Radio Silence (Matt Bettinelli-Olpin, Tyler Gillett, Justin Martinez, Chad Villella)
A group of friends travel to a house for a Halloween party, but it is apparently deserted.  A woman in white is spotted many times while the group walks through the house.  In the attic they find some sort of ritual going on, with cult members surrounding a tied up girl.  After the guys interrupt the ceremony, the cult members begin flying off into the ceiling.  They guys begin to leave the house, but decide to go back to save the girl.  They go back to the girl and cut her free, at which point all hell breaks lose and ghostly hands begin reaching out from the walls as they guys make their escape from the house.  As the guys try to make their escape, their car suddenly breaks down.  The girl (who was really a ghost) materializes outside the car just before it is hit by a passing train. 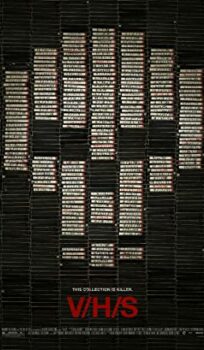