Valerian and the city of a thousand planets(2017)

The space station Alpha is home to millions of inhabitants from different races and species from all over the universe. Valerian and Laureline (Dane DeHaan and Cara Delevingne) are agents working for Alpha, and they come across a dark secret.

Valerian finds a pearl and a creature called a converter, both coming from the destroyed planet Mul. The planet’s inhabitants, the Pearls, kidnap Alpha’s Commander Arun Filitt (Clive Owen), forcing Valerian and Laureline to go rescue him. During their mission, they meet other alien creatures who help or try to kill them.

Upon meeting the Pearls, Valerian and Laureline learn that Filitt carried out the destruction of Mul for trying to obtain Mul’s pearls. He attempts to kill everyone in an attempt to cover up his secret. The heroes thwart his plans, and Filitt is arrested.

The Pearls recreate Mul using a pearl and a converter to form a simulation of the planet. Valerian and Laureline express their love for each other and get engaged. 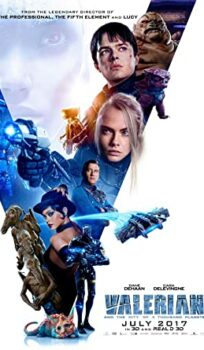