In about 1000 AD, One Eye, a mute warrior, has been held prisoner by the Norse chieftain Barde who forces him to participate in fights to the death for sport. Aided by Are, a boy slave, One Eye slays his captor and together he and Are escape.

One Eye (who keeps having violent red visions of the future and his own death) and Are, board a Scottish-Christian Viking vessel, joining men who on a quest to find the holy land. After getting lost in fog, they land on the shore of a river where they find an Indian burial ground, they believe they have landed in Hell where they think One Eye came from. Stupidly they take a jug from one of the graves (which where often laced with peyote during those times), and they all start drinking from the jug. All of the men seem to start having trippy visions and doing strange things as local indians pick them off one by one.

In the end, (keep in mind each person must draw their own conclusions), but it seems that One Eye sacrifices himself, letting the indians beat him to death and in exchange they let the boy live, it seems all of the vikings die. 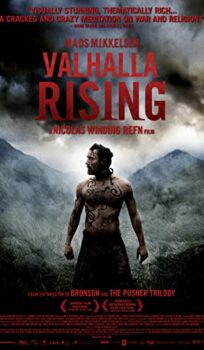