SHORT VERSION:
A.J. is turned into a vampire by Katrina, but not liking what he has become, he later has Keith (apparently) kill him by forcing him to stake him in the heart with a piece of broken furniture following a fight Keith has with one of the strip club’s vampires. Keith, the waitress Amaretto, and Duncan manage to escape the club after the former two start a fire to keep the vampires at bay, but as they drive away in A.J.’s car, Duncan reveals that he has been turned into a vampire as well. He makes them crash the car and it catches fire, but they are able to flee while the car explodes and kills him. Keith and Amaretto soon find themselves running from the neighborhood’s vampires until they retreat into the sewers, with Amaretto revealing that her real name is Allison and that the reason she knows Keith is because he kissed her when they played a game of spin-the-bottle back in fifth grade.

They stumble upon the vampires’ lair, and after they hide when the vampires all come down to rest for the day in their coffins, they spill some oil drums and ignite the oil, which burns the vampires to death. Allison is then suddenly held hostage by Katrina, but Keith is able to free her from Katrina’s grasp and then kills Katrina by bathing her in sunlight.

As he and Allison attempt to climb up a manhole back to street level, they are stopped by Katrina’s consort Vlad, but A.J. suddenly appears and kills him. He explains to Keith that the staking failed because the stake turned out to be formica. Keith and Allison get topside while A.J. stays in the sewer, telling Keith that he has changed his mind about his new state and wants to make the best of it. After Keith and Allison kiss, Keith tells A.J. to follow them from below, saying that he will take care of everything. He and Allison then walk off down the street.

LONG VERSION:
While escaping from the albino street gang he, A.J. (Robert Rusler), and Duncan (Gedde Watanabe) had an earlier confrontation with, Keith (Chris Makepeace) finds A.J.’s body in a dumpster just outside the After Dark Club, and then he runs when a garbage truck driver coming to get the trash attempts to run him over, since he is on the club’s payroll. He gets to a payphone and calls the police, telling them to come to the club so he can accuse the workers of murdering A.J. He re-enters the club and tells Duncan that A.J. is dead and the police are coming, but when he sits in the bathroom to collect his thoughts, A.J. suddenly turns up “alive” and says that his death was just a joke (the vampires at the club resurrected him after they discovered that Keith called the cops, so that way Keith’s accusation would be without merit). After the cops arrive, they see that A.J. isn’t dead and leave without arresting anyone. Keith gets left alone with A.J. and one of the strippers in the back room, and when Keith pressures A.J. to join him in leaving the place, the stripper reveals herself to be a vampire and attacks him. A.J. tries to stop her, but she pushes him aside, and Keith is able to kill her by staking her in the heart with a wooden stiletto heel.

A.J. tells Keith that all of the club’s workers are vampires and shows him that he has become one as well. However, he hates it, especially because he is now finding himself craving Keith’s blood and doesn’t want to hurt him. He soon hands Keith a sharp piece of broken furniture from the fight with the stripper and asks him to stake him, but Keith can’t bring himself to do it. A.J. then discloses to him that wooden stakes, fire, and sunlight do kill vampires, and he realizes that Keith won’t kill him and is willing to die for him because he believes that a fraction of his old self still remains. He then moves toward Keith as if he is going to bite him, but he takes the stake while Keith is holding it and stakes himself. He then throws Keith his car keys and tells him to make tracks while restating the methods of killing vampires, and then apparently dies. The waitress Amaretto (Dedee Pfeiffer) then comes in and sees the aftermath, but Keith quiets her.

The duo collect Duncan in the main room and try to escape, but Vic (Sandy Baron), Vlad (Brad Logan), and the strippers refuse to let them leave. Vic explains to Keith that there is no escape for them at all, because even if they do get out of here, they will have to contend with the vampires roaming around the streets. Keith responds by feigning surrender and asking for drinks for him and his friends as a last request. Vic grants it, so Keith asks for three brandies, and with Amaretto’s help, they surreptitiously spill the alcohol all over the place. Keith then ignites his glass and sets the bar on fire, then sets the spilled brandy ablaze, and the flames keep the vampires at bay. While Vic commits suicide over his failure, Keith and his friends effect a getaway through the basement’s trap door and drive off in the car after avoiding an attack from the corrupt garbage truck driver as well as a corrupt tow truck driver. However, Duncan reveals that he was earlier bitten and transformed and tries to get at Keith and Amaretto. He makes the duo crash the car and cause it to catch fire, but Keith and Amaretto are able to flee while the car explodes and kills him.

Keith and Amaretto break into a pawn shop to get weapons, during which Keith finds a bow and aims an arrow at Amaretto while demanding to know who she is and how she knows him. While she shows him that she isn’t a vampire, she doesn’t consider it a good time to disclose the information he wants to know. He then fires the arrow, which goes through the heart of a neighborhood vampire that was sneaking up on her. As they continue fleeing and avoiding more vampires (during which the albino gang shows up again, but the vampires kill them), they eventually find an entrance into the sewer. Before they go down, Amaretto finally confesses that her real name is Allison, and she knows him because he kissed her in a game of spin-the-bottle that they played back in fifth grade.

As they wander the sewers, they accidentally stumble upon the vampires’ lair, and they hide just as they all come in to rest for the day in their coffins. However, Allison accidentally gives away their presence when they try to sneak back out, so Keith knocks over some fuel drums scattered around the lair, and after they get out the door, he ignites the fuel and burns the vampires to death. Keith then notices that Allison has suddenly disappeared, but then she screams for him, so he goes in the direction he heard the scream come from and finds Allison in the grip of the head vampire Katrina (Grace Jones), who has her fangs bared and is ready to bite Allison. Keith readies his bow and arrow for a shot, during which he sees a small ray of sunlight coming down from in between some wooden boards above his head. When his fingers start to bleed from pulling the bowstring so taut, the smell of it distracts Katrina, enabling him to shoot the arrow through her mouth and pin her head to the wall without harming Allison. Allison then stakes her in the chest with a pipe and hurries to Keith’s side. Katrina soon gets free and walks towards Keith, and when she gets close enough, he knocks the boards loose, bathing Katrina in sunlight and killing her.

Keith and Allison then find a nearby manhole and start climbing up to street level, but suddenly, Vlad appears and pulls Allison back down. Keith confronts him, and after Vlad tells him that he and Allison must die for killing Katrina, a revived A.J. fatally stakes him from behind. A.J. explains to the duo that his suicide attempt failed because the stake turned out to be formica. Keith and Allison get to the surface while A.J. remains in the sewer, and he tells Keith that he has changed his mind about his new state and wants to try to make the best of it, saying that he could attend night school or find work during graveyard shift hours. Keith kisses Allison and then tells A.J. to follow them from below, saying that he will take care of everything, and then he and Allison walk off down the empty street. 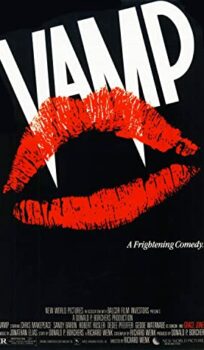