Charlotte (voiced by Wendee Lee) actually went along willingly with the vampire Meier Link (voiced by John Rafter Lee) because the two are in love with each other. D (voiced by Andrew Philpot) learns from the Barbarois demon Mashira (voiced by John Di Maggio) that the lingering spirit of the long dead and widely-hated Blood Countess Carmila (voiced by Julia Fletcher) was the one who requested the services of the Barbarois to watch over Meier Link and Charlotte as they made their way to her castle, the Castle of Chaythe. She told Meier & Charlotte that she was going to let them use her spaceship to go to the City of Eternal Night to be able to love each other without any trouble, but she had ulterior motives

While Meier & Charlotte are at the castle, Carmila cuts Meier vertically in half, then morphs into him and bites Charlotte, and Charlotte’s blood proceeds to enter the sarcophagus where Carmila’s corpse rests and starts reanimating Carmila. D confronts Carmila’s spirit, where he stabs her in the heart with his sword. Carmila’s body starts deteriorating, and she quickly moves in the direction of Charlotte’s body. Meier Link, who had managed to survive her attack, arrives and decapitates the head off of the semi-reanimated Carmila, and then D lets the parasite on his left hand (voiced by Michael McShane) consume her spirit. Her death causes the castle to start crumbling. Charlotte is weakened, but still alive. D and Meier soon fight, since D still had a job to do in returning Charlotte back to her family. Eventually, D stabs him in the chest, but he intentionally misses his heart, deciding that he would take just Charlotte’s ring to her father as proof of her death, since he could collect the reward if she was dead or alive. Meier and Charlotte make their way into the spaceship while D and the sole surviving member of the Markus Brothers team, Leila (voiced by Pamela Adlon), leave the castle. They both watch the ship take off into space.

Years later, people are having a funeral for Leila, and Leila’s granddaughter sees D in the distance and goes up and talks to him. He had come to fulfill his end of the pact: Whoever died first, the other would come and bring flowers to their grave. Though the granddaughter offers D to come see her family, he politely declines. She thanked him for coming anyways, and D flashes a mild smile at her before riding off into the countryside. 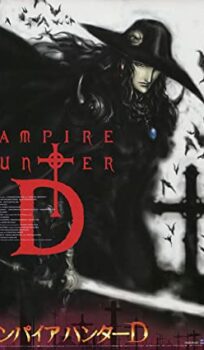