SHORT VERSION:
With Adam’s help, Vampirella ends up ruining Vlad’s plans for waging war with humanity, and soldiers from Operation Purge then storm his lair and kill all of his underlings, including Demos and Sallah.

Vampirella chases Vlad from the lair all the way to the Hoover Dam, and as they fight under a stormy sky, she throws a metal pole into his torso. He rips it out and prepares to strike her with it, but a lightning bolt suddenly comes down and hits the pole, and the electricity goes into him and sets him ablaze and kills him.

Vampirella decides to remain on Earth, in the hopes that she can help the vampires of this planet renounce Vlad’s legacy of hate and learn to live in harmony with the humans.

LONG VERSION:
Vlad (Roger Daltrey) has two of his underlings capture Adam (Richard Joseph Paul) and bring him to his lair, and then has some others contact Operation Purge and tells them to have Vampirella (Talisa Soto) bring Demos (Brian Bloom) to the Neon Boneyard, where they will exchange him for Adam. Walsh (Lee de Broux) summons Vampirella to Purge’s headquarters and tells her of this news, then sends her and Demos to the Boneyard, but also secretly plants a bug in one of the vials of her serum pack and sends a few Purge soldiers without her knowledge.

A few of Vlad’s goons – led by Quinn (Rusty Meyers) – show up with Adam, and Quinn tells Vampirella that Vlad has invited her to come back with them, wanting to see her again. The exchange is made, but Vampirella quickly figures out that Adam is actually another vampire shapeshifting as him and exposes the façade, and then Quinn makes her aware of the bug in her pack, which she promptly destroys. One of the goons then spots the Purge soldiers hiding nearby, so Vampirella turns into a bat and flies away, and Demos and Quinn do the same while the soldiers kill the other vampires.

Vampirella follows Demos and Quinn to Vlad’s base, and she silently watches a meeting between Vlad and the Big Twelve (a council of vampire elders), where she discovers the full scope of Vlad’s plans: In 24 hours, ten cloaked Drakulonian satellites orbiting Earth will each emit a carbon-based particle beam on a portion of the Earth, eradiating them and causing a nuclear winter-like effect on the atmosphere that will block out all sunlight for a significant period of time, which will enable all of the vampires to rise up and wage open war on humanity to gain control of the planet. Come morning, Vampirella enters Vlad’s room intending to kill him in his sleep, but he, Quinn, and Sallah (Corinna Harney) instead capture her and then lock her in the cell where Adam is being kept. In a test of loyalty to him and all vampires, since he believes her to be worthy of his new world order due to being the last pure Drakulonian, Vlad takes away her serum pack so she will have no choice but to drink from Adam – and therefore kill him – in order to stay alive. Vlad then initiates the countdown for the satellites. Back at Purge, Professor Steinman (Robert Clotworthy) reads Walsh a recently-arrived message from Vampirella, telling him that she went after Vlad, and she has enclosed the whereabouts of Vlad’s location so Purge can find Vlad and kill him if she fails. Walsh, Steinman, and dozens of Purge soldiers make haste towards Vlad’s lair.

Despite her efforts to restrain herself, Vampirella’s thirst overtakes her, so Adam decides to offer up his arm and has her drink some blood from it so they can both live. Later on, two of Vlad’s goons show up to bring Vampirella to Vlad, but she knocks them both out, and she and Adam escape. They then go face-to-face with Vlad and begin their attack, and Adam kills Sallah while Vampirella destroys the machine controlling the satellites, ruining Vlad’s plans. Meanwhile, Walsh and his soldiers show up and start wiping out the vampires, Quinn included, but Vlad makes his escape. As Vampirella gives chase, she is stopped by Demos, but Walsh kills Demos before he can kill her, and then he tells her to go on.

Vampirella finds Vlad, but he turns into a bat and flies away. She becomes a bat herself and follows him all the way to the Hoover Dam, where the chase resumes on foot. After running throughout the dam, Vampirella corners Vlad on an observation deck, and they wage a vicious battle under a now-stormy sky until Vampirella eventually rips a metal pole out of the deck and throws it into Vlad’s torso. Vlad pulls it out, but as he holds it high in preparation to strike her, a lightning bolt comes down and strikes it, and the electricity goes into him and sets him ablaze. He then tumbles over the edge of the railing and falls down the dam’s exterior to his death.

As Vampirella picks up her stepfather’s necklace (which fell off of Vlad’s neck) and puts it on, she narrates that, although Vlad is dead, his children of the night live on. Perhaps, in time, they will come to renounce his legacy of hate and learn to live in harmony with the humans, and perhaps it is her destiny to show them the way. 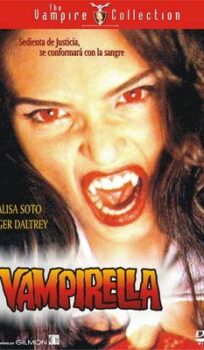