The entire movie is just a spoof of the first three Twilight movies, compressing spoofed highlights of the three movies into a 90 minute comedy, containing highlights such as Jacob chasing cats, and being contracted to remove his shirt every 10 minutes.

At the end of the movie Becca (Bella) and Edward get together and she saves him from completely exposing himself at the prom. However, everyone does see that the only thing to age on a vampire is his bottom, which is saggy and wrinkled. He is attacked by a group of “Team Jacob” teen girls who bash him in the head with a baseball bat that has spikes sticking out of it. 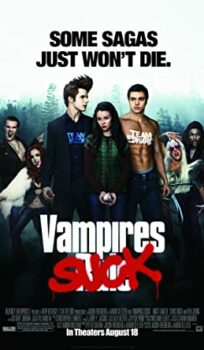