In killing Anna’s (Kate Beckinsale’s) brother (the Wolfman), Van Helsing (Hugh Jackman) is bitten. His associate, Carl the Friar (David Wenham), discovers that the only to kill Dracula (Richard Roxburgh) is for a Werewolf to bite him. They also discover that Dracula covered this with an antidote in case one of his minions turned on him. Van Helsing turns into a werewolf, kills Dracula, then (still as a werewolf) kills Anna just as she sticks him with the syringe containing the werewolf antiserum. Frankenstein’s Monster (Shuler Hensley) goes off on his own to start a new life somewhere else.
Thanks, Herbmeistr, who adds this poignant postscript: “Meanwhile, six feet beneath the earth, Mary Shelley (creator of Frankenstein), Bram Stoker (creator of Dracula and the character of Van Helsing), and Robert Louis Stevenson (creator of the shortly seen Dr. Jekyll/Mr. Hyde) are spinning in their graves.” 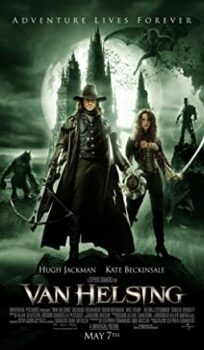