POOPER:
Only the kids, James and Briana, survive.  They find a police horse and ride out of the city, protected by Briana’s solar flashlight.  The cause of the power outage is never revealed and what happened to everyone who vanished is never made clear.

LONG VERSION:
Set in Detroit, Paul (John Leguizamo) is a theater projectionist who is reading about the lost colony of Roanoke when all of the power goes out in the theater, as well as the mall where the theater is located.  Wearing a headlamp, Paul walks through the theater and the mall and finds everybody has vanished, leaving behind their clothes, glasses, and jewelry.  Rosemary (Thandie Newton) is a physical therapist who was lighting a cigarette when the power went out.  After finding the hospital she works at full of clothes and no people, she rushes home to find that her infant son, as well as the babysitter, have vanished as well.
Luke (Hayden Christensen) is a television reporter who wakes up the next morning to discover that not only has the power gone out, but no electronic devices, including his cellphone, works.  He didn’t vanish because there were lit candles next to his bed.  He leaves his apartment to find the streets filled with clothes and no signs of anyone.  He makes it to the television station, where he is able to find a working videotape machine, and he is able to play a tape of the last newscast.  It shows the lights going out while the weathergirl (who was also his girlfriend) was on the air.  Just before the power went out, Luke sees her disappear.  He also finds a working signal from a station in Chicago, and the person on the air says the darkness is worldwide, and it is somehow able to trick people into thinking they hear their loved ones.  He also says to stay in the light at all times, but only trust the light you carry.

Three days later, Paul, Luke, and Rosemary find themselves at a bar on 7th Avenue.  It’s the only place in the entire city where all the lights are on because it’s being run by a gas powered generator.  The only person in the bar is James, the pre-teen son of the bartender who went to a local church to find help and never returned.  Together, the 4 of them try to figure out how to get out of the city before the fuel runs out in the generator.  By now, all of them had figured out that anyone carrying a light source of any kind (flashlight, lighter, etc.) was safe from the darkness.  Anyone who was without one and fully covered in darkness would vanish.  They are also able to see shadows with human outlines.  Paul and Rosemary think it’s the souls of those who have vanished, but Luke isn’t so sure.

Earlier, Luke had found a working truck, but the battery was nearly run down.  He and Rosemary, carrying many flashlights, go to the truck and begin to push it to the bar.  The plan is to use the generator to recharge the battery and the four of them would drive to Chicago and meet up with the survivors there.  Paul, who had somehow received a head injury, is still in the bar being treated by James.  When James goes to the restroom to get water for Paul, the lights suddenly go out.  James, who has a light with him, is safe, but Paul doesn’t and vanishes.  The lights then just as quickly turn back on.  While Luke and Rosemary are pushing the truck, they are surprised to see a little girl in front of them with a working flashlight, but she runs away before they can get to her.  At this time, Rosemary sees a baby carriage and hears the sound of a baby crying.  Thinking it’s her infant, she drops her flashlight and runs to the carriage, which is under a single working streetlight.  She reaches the carriage, but it’s empty.  She realizes that it’s the darkness tricking her just as the streetlight goes out and she vanishes.

Luke makes it to the bar with the truck.  He and James attach jumper cables from the generator to the truck battery, which is able to keep a charge as long as the accelerator is being pushed.  This finishes off the generator and the bar goes dark for good.  Luke and James get in the truck and drive off.  As they are driving, they pass the church where James’ mother (the bartender) was headed.  James gets out of the truck and goes into the church, but Luke drives off without him.  James enters the church and finds the only lights are from the communion candles.  He finds his mother’s coat, so he now knows she has vanished.  With the candles going out and the darkness about to consume James, Luke crashes the truck into the front of the church, and the headlights chase off the darkness.  But before Luke and get to James, the truck stalls out and the headlights go off, and Luke vanishes.  With only one candle still lit, James falls asleep in front of the candles.

The next morning, James wakes up and sees the little girl next to him.  She says her name is Briana, and she has survived due to the lights in her shoes and her solar flashlight.  They leave the church and see a police horse.  They climb on and they begin to ride towards Chicago.  As they ride off, the shadows of Paul, Luke, and Rosemary can be seen.  The movie ends as the sun is setting, but Briana’s flashlight turns on, so they are safe from the darkness. 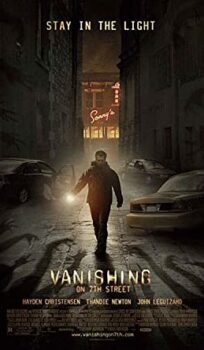