An existential road movie that people watched because of the Dodge Challenger.

Kowalski (Barry Newman) is a delivery driver who (courtesy of flashbacks) has lost everything he cares about. Kowalski picks up “The Dodge Challenger” in Denver (see Death Proof for what an icon it has become) and heads off to San Francisco. After failing to stop in Colorado, the chase begins. Kowalski gets help from a D.J. named Super Soul (Cleavon Little) who contributes to a kicking sound track. Kowalski makes it to California and after initially evading a road block made of two bulldozers, goes back and crashes into the road block creating a fireball. An earlier scene (deleted) with Charlotte Rampling as a hitchhiker (who may be a spirit) hints that Kowalski is headed for the next world. 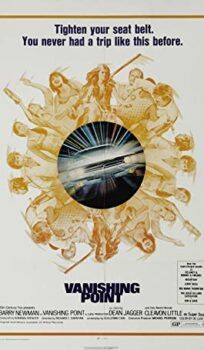