Detective Scottie Ferguson (James Stewart) loses his one true love, Madeleine Elster (Kim Novak), when the suicidal woman appears to jump from a tower in an old Spanish mission. A year later, a chronically depressed Scottie meets Judy Barton (also Kim Novak), a virtual twin for Madeline, and sets about obsessively making her over in Madeleine’s image. When he spots Judy wearing a necklace that Madeleine had admired, he realizes that something is amiss. He takes the unwilling Judy back to the scene of the ‘suicide’ to coerce the truth from her. She reveals that Scottie never met the real Madeleine, and that she (Judy) was a double that Gavin Elster hired to convince Scottie that Madeleine was suicidal, so that when he murdered her, there would be no suspicions. As soon as Judy confesses, however, she is frightened by a shadowy, dark figure (a nun), and she tries to run, falling from the tower and meeting the same fate as Madeleine. 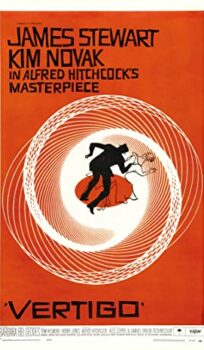