SHORT VERSION:
As they spend time in each other’s bodies, Charlie and Marshall fix the problems hampering each other’s lives.

Tina and Turk eventually manage to get the magic skull from them, and as they are leaving the city on a train, they accidentally activate the skull’s power and switch bodies themselves. Charlie and Marshall – who made it onto their train just as it was leaving the station – show up and snatch the skull from them before they can switch back, leaving them stuck in each other’s bodies presumably for good.

Later on, Charlie and Marshall wish themselves back into their rightful bodies, and Marshall learns that Charlie had proposed to his girlfriend Sam on his behalf a little while earlier, and Sam had accepted.

One day, Marshall’s boss Avery (William Prince) leaves a message on his answering machine saying that they need to resolve the problems that he has created with the South China Seas project. C.A.M. (Charlie-As-Marshall) hears this, and he quickly picks up M.A.C. (Marshall-As-Charlie) before the school day begins and tells him about the meeting. When they get to the mall, they stop to purchase an earpiece and a dual microphone and micro radio transmitter disguised as a pen for M.A.C. and a two-way headset for C.A.M. so the former can tell the latter what to say in the meeting. M.A.C. posts himself in a stockroom, unaware that Tina (Swoosie Kurtz) and Turk (David Proval) have spotted him going in there.

In the midst of the meeting, C.A.M. hears Turk abducting M.A.C. After making a small speech to Avery about just how hard Marshall has worked on the project, forgoing spending time with the people he loves in the process, C.A.M. leaves the meeting to look for M.A.C., but only finds his schoolbag and headset. He later gets a call from M.A.C. telling him that he has been kidnapped, and he will only be returned to him if he brings his abductors the magic skull.

After retrieving it from a Thai lama (who tells him off-screen how the skull’s power works so he and M.A.C. can switch back their bodies), Tina calls C.A.M. and tells him to meet her and Turk at a subway stop, where they will make the exchange. It goes off without a hitch, but M.A.C. tells C.A.M. that the crooks are now on their way to the train station to catch a train to New York, and they need to stop them so they can’t leave with the skull. They steal a police motorcycle to get there fast, attracting the attention of some cops, who chase them. They manage to lose the cops at the train station and get on Tina and Turk’s train in the nick of time.

As Tina and Turk are sitting in a cabin, they get into an argument. At the height of it, Turk wishes to exchange places with Tina, and they touch the skull at the same time and switch bodies themselves. They scream, which alerts Marshall and Charlie to their location. They quickly enter their cabin, grab the skull, and run. Soon after, the police force the train to a stop, and C.A.M. is arrested and brought to the police station, along with M.A.C. and the skull, leaving Tina and Turk stuck in each other’s bodies presumably for good. Charlie’s stepfather Cliff (Charles Lucia) eventually comes by and gets C.A.M. released, and they and M.A.C. grab the skull and go.

Sam visits C.A.M. that night and tells him that Avery has decided to let him continue to run the project, and C.A.M. then asks her to drive him over to Charlie’s house so he can give him a Christmas present (the skull). Along the way, C.A.M. proposes marriage to her on Marshall’s behalf. Once at his house, C.A.M. enters his bedroom through the window so as not to wake his mom Robyn (Jane Kaczmarek) and Cliff, and after he explains to M.A.C. how the skull’s power works, they touch it at the same time and wish themselves back into their rightful bodies.

Charlie tells his father to make sure that he locates the skull’s rightful owners the next time he goes to Thailand, and informs him of how he is still the head of the project at work. Marshall bags up the skull, kisses Charlie goodbye, and leaves. Once he enters Sam’s car, he finds out about how Charlie proposed to her on his behalf, and she tells him that she accepts. Charlie overhears this on his headset, since the spy pen is on the dashboard. Marshall looks back at his son and smiles before he and Sam drive away. 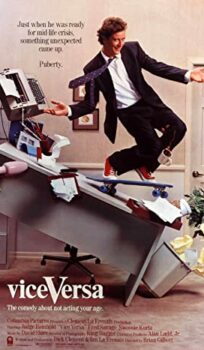