Vicky and Cristina are in Barcelona for the summer and then agree to — and do — travel to Oviedo with Juan Antonio for the weekend. Vicky cheats on Doug, her fiance, and has sex with Juan. Cristina and Vicky split from Juan.

Juan calls Cristina, and he takes Cristina to his house, where they have sex. They get into a serious relationship. Cristina moves in with Juan.

Later on, Maria Elena, Juan’s ex-wife (who in the past attempted to kill Juan), must move in with Juan and Cristina because of her nervous breakdowns. The three are sexually involved with one another at one point, but Cristina becomes unsatisfied — and leaves. Juan and Vicky wind up meeting again at a party, and they go on a date the next day — and kiss.

Maria Elena unexpectedly shows up and shoots a gun wildly, hitting Vicky’s hand. Vicky lies to Doug and says her language teacher shot her by mistake.

Doug never finds out about Juan, and Vicky, Cristina, and Doug travel back to America. 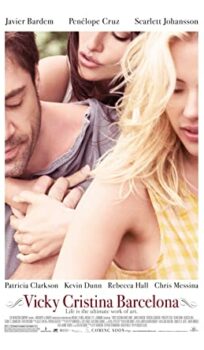