Santa Claus (David Harbour) has become a jaded and cynical alcoholic over the last few centuries after having seen people get more and more “naughty”, causing him to lose his Christmas spirit. He ends up at the home of the wealthy Lightstone family, which is being taken over by mercenaries led by a man calling himself “Mr. Scrooge”. He is there to steal a fortune hoarded by the Lightstone matriarch Gertrude. Santa’s reindeer leave him stranded there, and before he can make off on foot, he is called upon by the youngest Lightstone child, Trudy, who still believes in him and asks for his help. Santa then decides to deliver some seasons beatings.

Santa, who used to be a vicious Viking warrior, brutally kills Scrooge’s goons, who begin to slowly see he is who he says he is. Making matters more complicated is that Gertrude’s extraction team meant to rescue them are also working with Scrooge. The money turns out to already be gone, as Trudy’s father Jason had stolen it to make off with Trudy and his estranged wife Linda, as well as distancing himself from his snobby family. The family manages to kill some of Scrooge’s goons, while Santa kills most of the extraction team.

Scrooge and Commander Thorp kidnap Gertrude, forcing Santa to chase them. Santa fights Scrooge and uses his Christmas magic to pull him up a chimney, causing his body to be crushed on the way up. Thorp shoots Santa, but Gertrude shoots and kills Thorp. Santa is dying, but the Lightstones now believe in him, so it’s enough to revive him. Santa and the Lightstones thank each other as the reindeer return to take Santa back so he can finish his Christmas duties. 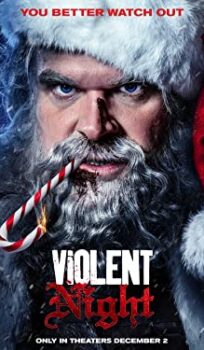