Foster (Jamie Lee Curtis), Steve (William Baldwin), and Nadia (Joanna Pacula) discover that the alien is trying to get to Lord Howe Island, and Nadia explains that a British Intelligence station is there, and they have digital linkups to all military and commercial satellites in the Southern Hemisphere. Realizing that if the alien got to that station, it could beam itself anywhere in that area, they decide to sink the ship by flooding the hold with fuel and then detonating it. Everton (Donald Sutherland), turned into a cyborg by the alien, then appears and attacks them, but they blow him up with a grenade.

Just after they get all of the fuel into the hold and set a bomb to ignite it with, the alien attacks them in its “Goliath Machine” form. It captures Foster and tries to torture her for the location of the bomb, but Richie (Sherman Augustus) – who had seemingly bailed on Foster and the others earlier on – comes to her rescue, along with Steve and Nadia. Foster and Nadia manage to get away, but the Machine brings some of the ceiling down on Richie and Steve before going after them, fatally wounding Richie. Before he dies, he tells Steve of an escape route that he made in the ship’s missile bay. A short time later, Foster and Nadia encounter the Machine again, who shows them that it has found the bomb and then crushes it. Nadia then attempts to destroy the Machine by blowing up some nearby gas tanks, sacrificing herself in the process, but the Machine survives.

Foster runs and meets up with Steve, and they head for the missile bay, where they find an ejection seat attached to a rocket motor. They strap themselves into the seat just as the Goliath Machine is breaking through the floor, and with a remote they launch the motor, which pulls them out of the ship through a missile shaft and into the sea. The Machine notices that the seat is pulling a wire connected to a massive bomb that Richie put together, and the wire pulls the pins on the bomb, causing it to explode. The explosion’s fire hits the fuel in the hold, annihilating both the ship and the alien.

The next day, a helicopter from a nearby rescue ship saves Foster and Steve. 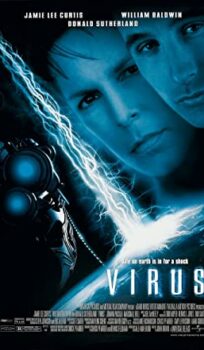