Louden (Matthew Modine) and Carla (Linda Fiorentino) fall in love with each other and even sleep together, but when he returns home from school the night before his wrestling match with Shute (Frank Jasper), he finds her gone, and he realizes with a broken heart that she has left to continue on to San Francisco.

The next day, he makes the 168-pound weight limit for the match, and as he is preparing for it in the locker room, Carla shows up. Louden tells her that he was upset with her because she left without saying goodbye, to which she replies that she left the way she did because she thought that he was concentrating on her so much that he was forgetting his goal of defeating Shute. She tells him that she never meant to hurt him, and she just didn’t know how to say goodbye. Louden tells her that he would do it all again, and she says she would, too.

She sticks around to watch the match, which Louden wins, ending Shute’s undefeated streak. He smiles at Carla before celebrating with his teammates.

Before the credits roll, Louden narrates that he thought a lot about his match with Shute and the time he spent with Carla, and he realized that his friend Kuch (Michael Schoeffling) was right: He did go on a vision quest. But, all he settled for was that we’re born to live and then to die, and we have to do it alone, and in our own way. He guesses that’s why we have to love those people who deserve it like there is no tomorrow, because when you get right down to it, there isn’t. 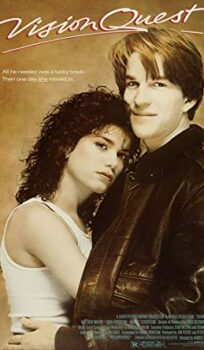