Reese (Don Cheadle) and Roark (Tommy Lee Jones) realize that the only thing to do in order to prevent the lava from causing further damage is to create a canal that will re-direct it to the ocean, and to achieve it, they must blow up the Capitol Records building, which would help create said canal after collapsing.

It is set in motion.  However, Roark has to run into the explosion area in the last second to rescue both her daughter Kelly (Gaby Hoffman) and the little boy she was taking care of, briefly before the explosion.  Fireman Harris (Michael Rispoli) and his partner sacrifice themselves to achieve it.  An enormous crack is born, and the lava ends up flowing into the Pacific Ocean.  The city is saved, it starts to rain -which helps to clean all the mess caused by the eruptions-, and Roark and Dr. Barnes (Anne Heche) hook up.

The movie ends with some info that states the now official existence of Mount Wilshire, in the middle of Los Angeles area, with a status of ACTIVE. 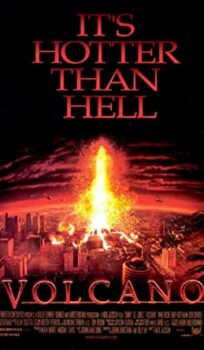