Hitler never intended to let the Jews on the SS St. Louis reach safety in Cuba. He was toying with them, knowing that no other country wanted to take them in. He expected the ship would be forced to return to Germany. That would prove that no other country cared about the Jews, which would free him to imprison and kill the Jews.

As the ship approaches Cuba, it is turned away. When the ship tries to take the Jews to the United States, the U.S. Coast Guard forces the ship to return to Germany, where the Jews know they will be arrested and sent to death camps. A few of the Jews on board, including Anna Rosen (Lynne Frederick) commit suicide. Others try to start a mutiny.

The Captain (Max von Sydow) does not want to return the Jews to certain death, so he promises to crash the ship onto the coast of England. Before that can happen, the Netherlands and a few other countries agree to take in the Jewish refugees.

Postscript:
When World War 2 started a few years later, most of the countries that had taken in the refugees were conquered by Germany, and most of the Jewish survivors were arrested and killed by the Nazis anyway. 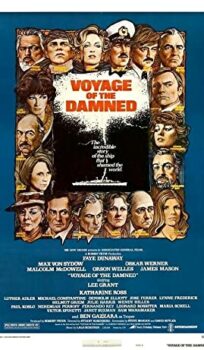