Admiral Nelson (Walter Pidgeon) tells the United Nations that Earth’s only hope is for the USS Seaview to fire a nuclear missile at the Van Allen Belt from a spot in the Pacific Ocean near the Marianas Trench. Professor Zucco and his allies at the U.N. reject this plan, and insist that the Earth’s temperature will go down by itself.

There are two saboteurs on the Seaview. Dr. Hiller (Joan Fontaine) is in love with Professor Zucco and tries to prevent the Seaview from carrying out Admiral Nelson’s plan. While trying to disable the ship’s missiles, she contracts radiation poisoning and collapses into a shark tank, where she is devoured.

Meanwhile, scientist Miguel Alvarez (Michael Ansara) has become a religious fanatic and wins several crewmen to his side. He thinks it’s God’s will for Earth to perish, so he and his followers take Admiral Nelson prisoner, to prevent him from launching his missiles.

Captain Crane (Robert Sterling) puts on a diving suit, leaves the Seaview, and manages to launch a nuclear missile from outside. The nuclear blast extinguishes the fire in the Van Allen Belt, and Earth is saved. 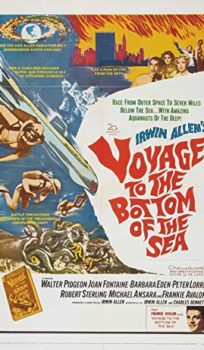