George W. Bush (Josh Brolin) goes from a drunken Yale frat boy to numerous unsuccessful ventures in oil rigging, sporting goods, and the military.  Always in the shadow of his father George H.W. Bush (James Cromwell) George attempts to finally win his father’s respect.  With the constant support of his wife Laura (Elizabeth Banks) he makes a unsuccessful run for office in 1980. Undeterred, he will run and win as Texas governor years later.

Later, thinking it is God’s will, he runs for President and of course wins his first term. After 9/11 his advisors in a combination of wanting oil and justice, push him towards the Iraq War, which they believe can be done quickly.  It winds up turning up badly with Bush exasperated at its increasing failure.  The film ends on two key scenes. The first is in 2004, during a disastrous press conference where Bush is completely unprepared for the barrage of attacks by the reporters.  The second one is a dream sequence with Bush on a baseball field trying to catch a fly ball.  In other instances he had been able to catch it but now it will not come down, and he searches the sky, wondering what is wrong.

This metaphor seems to imply that Bush being able to catch the ball before (the ball being control of his life) meant he could do good and the fact the ball doesn’t come down in the last sequence proves he has lost his way and illustrates his bewilderment in trying to find his way back. 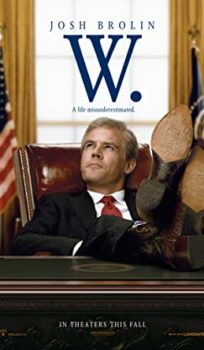