Submitted by Dustin and Sheila P

After getting “cleaned up,” Johnny Cash (Joaquin Phoenix) proposes marriage to June Carter (Reese Witherspoon) on the tour bus. She rejects his offer since he has only been clean for less than six months, and tells him he is only allowed to talk to her while they are on stage. During a later concert, Johnny asks June to marry him in front of the audience, during a song. At first she rejects his offer, but he convinces her and she says yes. They kiss, and the text on the screen says they were married in 1968, stayed married for 35 years, and had a son, John Carter Cash. Johnny and June both died in 2003. 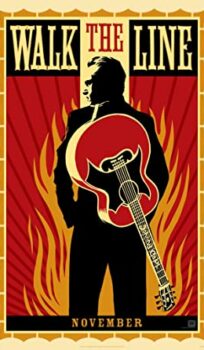