Wall Street trader Jacob Moore (Shia LeBeouf) takes his $1.4M commission and buys his fiancé Winnie an engagement ring and invests a million dollars back into his trading firm, Keller Zabel.  But amid rumors of financial discrepancies, the firm’s stock bottoms out and his mentor, Lewis Zabel, kills himself.  To avenge Lewis’ death Jacob starts stock rumors leading to the loss of millions for the competing firm, led by the unscrupulous Bretton James (Josh Brolin).  James is impressed by Jacob’s talents and recruits him to work for him.

Meanwhile Gordon Gekko (Michael Douglas, star of the first Wall Street) is out of prison and trying to make his way in the world again.  Winnie (Carey Mulligan) is actually his daughter but due to the suicide of her brother and the fact that Gordon has been jailed for years, she wants nothing to do with him.  Jacob seeks him out for advice on how to bring James down.  In return Gordon wants Jacob to help he and Winnie resolve their relationship.

Bretton James reneges on a deal to invest in a clean energy company after Jacob assures said company that there will be a $100M investment.  Gordon tells Jacob that Winnie has that much money in a Swiss account which had been earmarked for himself once he got out of prison. But because she is estranged from her father, Winnie never turned the money over to him.  Jacob convinces Winnie to turn the money over to him to invest in the energy company. She agrees, but when Jacob has Gordon make the investment, he instead disappears with the cash.  Winnie, having predicted Gordon would betray him, breaks up with Jacob even though she is now pregnant with his child.

To make things right, Jacob writes a scathing article about Bretton James and has Winnie’s news website publish it. The rumors spread like wildfire amid the Wall Street financial crisis and James is ruined.  Jacob also visits Gordon, now a head of a powerhouse investment firm in London, reminds him that family is the only thing that matters and shows him sonogram pictures of his grandson.  Gordon softens, decides of invest $100M in Winnie’s name in the energy company and starts to rebuild his relationship with her.  Jacob and Winnie also reconcile and a year later celebrate the birthday of their son, Louie, with Gordon in attendance. 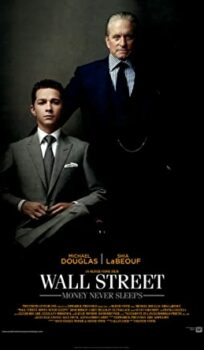