Joey (the Warhorse) and Albert (Jeremy Irvine) are reunited after Joey is freed from entanglement by barbed wire in No Man’s Land by a German soldier and a British soldier working together. The British soldier wins a coin flip and brings the injured horse back to a field hospital.

A British soldier is about to put the horse out of its misery, when Albert whistles his call. Joey responds and Albert, though temporarily blinded by a mustard gas attack, is able to identify the horse. Joey is nursed back to health and Albert returns home to his mother and father’s farm.

Albert has a new found respect for his father’s experience in the Boer war when Albert hands back to his father the colored cloth he used to identify Joey.

The movie incorporates certain elements of the Tony Award-winning play, like Joey’s acquisition, sale and training, the obstreperous goose on the farm, the death of Captain Nicholls (Tom Hiddleston) and the encounter with the tank. But it adds a subplot of Emilie’s grandfather hiding the horse, eliminates the helpful German soldier that hides Emilie, but includes the life and death of Joey’s companion horse, Topthorn. It also has some spectacular scenes of WWI trench warfare. 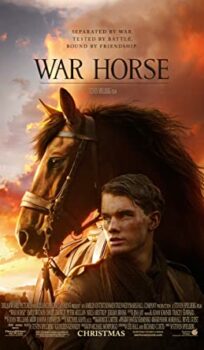