SHORT VERSION
Hauser rescues Natalie from the kidnappers and finds out that Yonica is his daughter.  The Viceroy is his former co-worker who tried to kill him years earlier, and he is killed when a missile malfunctions and hits his hideout instead of Hauser.  The three fly out of Turaqistan, but their plane is being followed by a missile.  The Vice President then announces the invasion of a neighboring country.

LONG VERSION
Brand Hauser (John Cusack) is a hitman for Tamerlane, a corporation run by a former US Vice President (Dan Ackroyd).  Hauser is sent to the war torn country of Turaqistan, where he is to assassinate the CEO of an oil company from the neighboring country of Ugigistan that is in competition with Tamerlane in the construction of a oil pipeline.  He will go in undercover as the producer of a trade show run by Tamerlane, which will conclude with the wedding of pop star Yonica Babyyeah (Hilary Duff).  Once there, he will be taking his orders from a man only known as the Viceroy, who is constantly hiding in a secret location.

Now in Turaqistan, Hauser begins his work as the trade show producer and planning to assassinate the CEO.  He meets Natalie Hegalhuzen (Marisa Tomei), a left-wing reporter looking for “the truth”.  Their constant interaction eventually leads to a friendship between the two.  Hauser also meets Yonica, who seems to like him, but he will only act like a father to her.  At this time, we learn that several years earlier, Hauser attempted to quit Tamerlane, but his co-worker Walken (Ben Kingsley) tried to kill him.  Later that day, Hauser found his wife dead and his infant daughter kidnapped.

Throughout the movie, Hauser’s attempts to kill the CEO are thwarted by unusual events, and every delay causes him more stress in having to kill the CEO and run the trade show and plan the wedding.  Meanwhile, Natalie learns that Yonica’s fiancee planned to sell a videotape of their honeymoon night.  The impending scandal is averted when Hauser convinces the fiancee to blame one of the members of his entourage (he is the son of the local Emerit, and his friends are gangbangers).  Later, while preparing for Natalie’s interview with Yonica, the entourage attempts to kill Hauser.  The way he kills all of the members of the entourage reveals to Natalie and Yonica that Hauser isn’t who he claims to be.  The women take a cab to their respective hotels, but Natalie is kidnapped by the camera crew hired to film the video.

So on the day of the wedding, Hauser must rescue Natalie (which he does), assassinate the CEO (which he doesn’t, and tells the CEO that he needs to increase his security), and oversee the wedding.  After calling off the assassination, Hauser goes to where the Viceroy is hiding, and he sees that it’s Walken.  Walken admits to killing Hauser’s wife and kidnapping his daughter, who grew up to become Yonica.  Hauser then goes to the trade center to get Yonica (who just minutes earlier called off the wedding) before the Viceroy/Walken can kill him.  Walken orders a missile to blow up the trade center, but it malfunctions and blows up the Viceroy’s hiding place, killing him.

The movie ends with Hauser, Natalie, and Yonica flying out of Turaqistan in Yonica’s private plane, which is being followed by a missile.  The last scene shows the former Vice President announcing, as a result of the tragic events,  the invasion of Ugigistan. 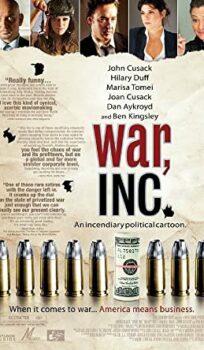