A giant, green, man-eating Gargantua appears in the coastal waters of Japan, eating sailors and busting up lousy nightclub acts (no, really). Scientists theorize that the beast is the adult version of a friendly baby Gargantua they’d studied years before, which had escaped into the mountains. The Japanese army finally pins down Green Gargantua (GG) and nearly kills it when the original, larger Brown Gargantua (BG) appears from the mountains and drags his smaller ‘brother’ to safety. It turns out GG is a semi-clone or offshoot that grew from BG’s cells. Everyone now knows GG is the evil one but realize if they bomb him, his cells could spread and grow until the world is overrun with the cannibal giants. Climax comes when BG discovers GG is a man-eater; this pisses off the still-friendly BG ,who thrashes GG severely. The enraged GG takes off running for the ocean, and Tokyo is naturally right in his path. BG gives chase and both monsters fight it out on the Tokyo waterfront. Eventually both end up out in Tokyo Bay where an absurdly convenient volcano erupts right next to them, presumably destroying both.

Note: One of the scientists makes a passing reference to an unclassifiable dessicated hand they’d found years before. This line is irrelevant as it is a reference to a plot point not included in the final film; the writers originally intended to identify the Gargantuas as cellular offshoots of the title monster of 1965’s “Frankenstein Conquers the World” in which /that /creature tears off its own hand to escape captivity, presumably spreading its own self-replicating tissues around the countryside. In fact, some Japanese sources still refer to the Gargantuas as “The Frankenstein Brothers.” 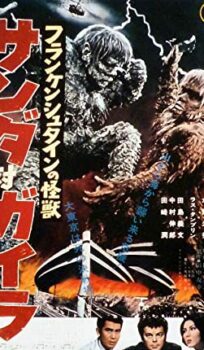