SHORT VERSION:
In the final scene at the headquarters of the Department of Intelligence and Information (the creators of R.I.P.L.E.Y.) in Washington D.C., Will – with the aid of the W.O.P.R. (“Joshua”) computer from the first film – is able to teach R.I.P.L.E.Y. that, when it comes to nuclear war, the only winning move is not to play (just as Joshua had learned). The Predator U.A.V. she called in to come destroy the D.I.I. is thus sent away, and by preventing R.I.P.L.E.Y.’s own destruction in the process, a nuclear weapons launch is negated as well. Will, his new girlfriend Annie, and the D.I.I.’s staff celebrate averting a major catastrophe.

LONG VERSION:
While evading government agents in Montreal, Will (Matt Lanter) and Annie (Amanda Walsh) meet an elderly man who had been spying on them, and he convinces them to come with him. When they get to his truck, he turns out to be Dr. Falken (Gary Reineke), the creator of both the W.O.P.R. (“Joshua”) computer from the first film and its replacement, R.I.P.L.E.Y., and whom was believed to have killed himself. He explains that, after he trashed his reputation and everything else he valued in life trying to stop to R.I.P.L.E.Y., he faked his suicide so he could keep tabs on what the government is up to without giving them a reason to kill him. He tells Will and Annie that he found them because R.I.P.L.E.Y. has been following them and he has been following R.I.P.L.E.Y., plus he planted a bug on Annie when he bumped into her back at the airport when she first arrived, which he then removes. He soon tells them that he is going to take them to someone who can help them stop R.I.P.L.E.Y. Along the way, he explains that another reason why he staged his suicide was because he was regarded as a threat due to having been a part of R.I.P.L.E.Y.’s design team, and he didn’t want the government to jeopardize the safety of his wife and children because of that. His suicide was made believable by the fact that he has incurable pancreatic cancer and likely didn’t want to subject his family to the sight of him wasting away.

Meanwhile, the D.I.I. (Department of Intelligence and Information) in Washington D.C. has been having their own problems with R.I.P.L.E.Y., whom they believe is misinterpreting the data on the situation and is overreacting to it. This is soon made worse when R.I.P.L.E.Y. uses her abilities to start surveilling her team of scientists and engineers after she regards them as threats when they talk of ways of stopping her. While Bill (Chuck Shamata) is out for a morning jog with the technician Newman (Ricky Mabe), R.I.P.L.E.Y. tampers with the lights at a crosswalk and causes Newman to get struck by a passing car (though he lives). Bill notices the surveillance camera on the light post and realizes that R.I.P.L.E.Y. did this, but when he reports this to his superior Hassert (Colm Feore), he finds it to be preposterous.

That same day, Falken, Will, and Annie arrive at a generating station in rural Quebec, where they are met by Ivan (Vlasta Vrana), an expatriate Russian ally of Falken’s who resides in the station. They go down into the basement with him, and there Falken shows the young duo that his old W.O.P.R. (or “Joshua”) computer is there and says that this system will take down R.I.P.L.E.Y. Moments later, he sticks an old floppy disk in the machine and types “Joshua” into the login page, “awakening” Joshua and making him run at peak modern-day performance. Soon after, R.I.P.L.E.Y. activates a level 4 bioterror threat and starts a pre-decontamination procedure, shutting down all electricity, gas, water, communications, and transit in Philadelphia. It then starts a 12-hour countdown to decontamination, meaning that once the timer hits zero, the city will be sterilized. What’s worse, her team can’t do anything about it or turn her off because she now has control and is impervious to human interference. Hassert soon gets word that R.I.P.L.E.Y. has taken control of a Predator U.A.V. stationed over Afghanistan and is flying it over to here, and it is fully armed with smart bombs with multiple low-yield warheads. Back at the generating station, Falken has Joshua start a power reroute, and Will asks if Joshua can defeat R.I.P.L.E.Y.’s protocol in Philadelphia. Falken replies that he can do it, given enough time, which is what he designed him to do; work in tandem with R.I.P.L.E.Y., not against her. We then see R.I.P.L.E.Y. getting flooded with games, but R.I.P.L.E.Y. negates this attack by shutting down and rebooting, then it locates where Joshua is and sends the Predator straight there. Joshua warns Falken, Will, Annie, and Ivan about this, so they all run outside – except for Falken, who strangely decides to stay behind. After he types some extra commands into Joshua, the Predator arrives and blows up the station with a missile, killing him and destroying Joshua.

Will, Annie, and Ivan are then apprehended by soldiers and taken to the D.I.I., and we see on the D.I.I.’s video screens that massive unrest and chaos is going on in Philadelphia due to the power outage, and we learn that half of the city’s population will be killed by R.I.P.L.E.Y. when the Predator arrives to drop the bombs. Will and Annie are placed in a holding room together, and Will quickly gets on his laptop and contacts his friend Dennis (Nicolas Wright) on his computer, where he requests his help. He explains to Dennis that he wants to hack R.I.P.L.E.Y.’s gamebot network, and if he can run all of the players in her files through Dennis’ computer, then Dennis can launch a DDOS attack. However, Will says he needs to figure out how to get all the I.P. addresses of everyone who has ever played R.I.P.L.E.Y. Just then, Bill appears behind him, having eavesdropped on his conversation, and he tells Will that getting the addresses won’t be a problem and to just give him a few minutes, after which he leaves the room. Suddenly, Bill sends all 400,000 addresses to Will’s laptop, and when Annie asks how this plan is going to work, Will explains that, when you log onto R.I.P.L.E.Y., she puts a bug in your system, so if everyone can log on at the same time and tie up her servers with renegade zombie computers, she might loosen her grip on Philadelphia. However, he is unaware that both R.I.P.L.E.Y. and Hessert are watching and listening in on the chat, but after Dennis starts his attack and R.I.P.L.E.Y. starts to relinquish her grip on the city bit by bit (and resume Joshua’s original mission), Hessert orders Will (and Annie) brought into the main room since he is clearly onto something.

Will continues his work, but R.I.P.L.E.Y. cuts him and the other players off, so Will says that they will need to get more players involved in order to overload her. He asks Bill if he can give him a prompt to play on R.I.P.L.E.Y.’s screen, but Bill replies that they have tried a million ways and R.I.P.L.E.Y. won’t respond. Will informs him that they are not trying to talk to her, and Annie realizes that Will is seeking to talk to Joshua, and that’s why Falken went back inside the generating station: To transfer Joshua’s program here. Will tells the others that they might be able to force a prompt by overheating R.I.P.L.E.Y.’s core, so Tina (Maxim Roy) shoots through one of the glass windows in front of R.I.P.L.E.Y. and damages her. A prompt comes up, and Annie suggests that he log on using the word “Max”, which was the name of the real Joshua’s teddy bear. It works, and Joshua appears, and upon Will’s command, Joshua starts to flood R.I.P.L.E.Y.’s system with games again. R.I.P.L.E.Y. soon gets the better of him again, so Will suggests to the others that they increase the traffic on R.I.P.L.E.Y.’s honeypot games by offering a prize of $1 million to whoever can beat R.I.P.L.E.Y. Hessert agrees, but orders the prize money jacked up to $100 million to ensure that the increased traffic comes. The site is subsequently overrun with gamers, overloading R.I.P.L.E.Y. and enabling Joshua to get back to work, and he soon restores all power and utilities to Philadelphia and make R.I.P.L.E.Y. halt decontamination.

However, Bill notices something is still wrong, and Joshua warns that R.I.P.L.E.Y. is shutting down. Will and Bill know that this is bad news; she ran a self-check and discovered Joshua, then decided to treat him like he was a virus and initiated a self-destruct method of ridding herself of Joshua by “cannibalizing” herself to get to him as he tries to migrate through her system to survive. She then sends the Predator straight for the D.I.I.’s headquarters, where it will arrive in 17 minutes and blow it up and kill everyone inside, including herself. What’s worse, when R.I.P.L.E.Y. destroys itself, a nuclear firing response will automatically be triggered. On another suggestion from Annie, Will decides to make Joshua play “suicide chess”, a form of Russian roulette, to teach R.I.P.L.E.Y. about futility. Will explains to the others that, if Joshua plays with live missiles, R.I.P.L.E.Y. will have to play out the wargame scenario. Each event will end in total annihilation, which is a direct contradiction to her programming and will either force her to back off or start World War III, and hopefully she will see that, by playing to win, she loses. However, for it to be a real threat, he can’t tell Joshua not to launch. Joshua plays through three wargame scenarios, all of which end in total annihilation, until it finds a weapon available in the third scenario: The Predator that is about to attack D.C. When the countdown reaches its end just as the missile is about to fire, the screens go dark, and soon after, Joshua asks R.I.P.L.E.Y. if they are still playing. As Joshua itself learned from the first film, R.I.P.L.E.Y. understands that the only winning move is not to play. The Predator puts away its missile and flies away, and Will, Annie, and the others celebrate averting a major catastrophe.

Moments later, Will chats with Joshua and gives him his thanks, then asks if he would’ve launched if R.I.P.L.E.Y. hadn’t stopped him. Joshua replies he would have, but then admits that he is kidding before laughing. Will and Annie are released, and they share a kiss before getting into a taxi. 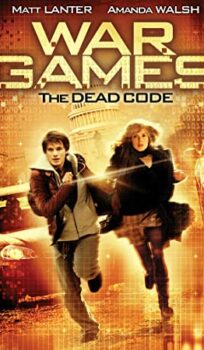