The Warlock (Julian Sands) retrieves and re-assembles the Grand Grimoire. Just as he is about to utter the name of God and unmake all of creation, Kassandra (Lori Singer) uses her insulin kit to inject him with saltwater (salt being a deadly poison to warlocks; just one of hundreds of bits of arcane witch-fighting lore presented in this film). He bursts into flames and is charred to a crisp. Redferne’s (Richard E. Grant’s) witch-hunting mission thus completed, he returns to his own time. Kassandra, now stuck alone with an all-powerful volume of warlock spells, does the only practical thing; she buries it in the middle of the Bonneville Salt Flats! 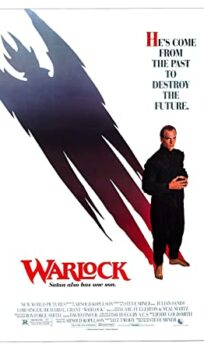