When a retired superhero known as The Comedian is murdered in his home, his former partners band together to find his killer.

Rorschach (Jackie Earle Haley) and Nite Owl (Patrick Wilson) realize that their former teammate Adrian Veidt is behind The Comedian’s death. When they confront Veidt at his home in Antarctica, he confesses to the killing, as well as to his role in framing Rorschach. He also admits that he created the tachyons that have prevented Dr Manhattan (Billy Crudup) from seeing the future and manufactured the cancer scare that prompted Manhattan to leave Earth. Veidt plans to end the Cold War by destroying 15 cities across the globe and pinning the blame on Dr Manhattan. He believes that if all the nations of the world face a common threat, they will put aside their differences and live in peace. Veidt killed the Comedian because he found out what Veidt was doing. Veidt says there is no way the heroes can stop him because he has already carried out his plan.

When Dr Manhattan and Laurie (Malin Akerman) travel from Mars to New York City, they arrive to find the charred remains of The Big Apple. Manhattan realizes Veidt’s role in the destruction and transports them to Veidt’s home. As the heroes watch, President Nixon holds a televised press conference announcing that he has reached an agreement with other world leaders to end their hostilities in light of this global tragedy. Realizing that Veidt’s plan may actually succeed in bringing peace to the world, Nite Owl, Laurie and Dr Manhattan agree to keep Veidt’s secret. Rorschach refuses to go along with the plan and is killed by Dr Manhattan. Rorschach’s death enrages Nite Owl, who beats Veidt before leaving with Laurie.

A short time later, we see that Nite Owl and Laurie are happily living together. They are also planning on resuming their crimefighting activities. Meanwhile, the editor of the New Frontiersman complains that the outbreak of peace has left him with no stories to run in his tabloid. He tells his assistant to pull something out of the “crank” pile. On top of that stack is Rorschach’s journal, which contains the details of their investigation into The Comedian’s murder.

Casey adds…
In the graphic novel, instead of convincing the world Dr. Manhattan is the threat, Veidt genetically engineers a giant alien squid that kills half of New York with it’s psychic powers.
The world unites to fight what they believe is an alien invasion, instead of against Dr. Manhattan. 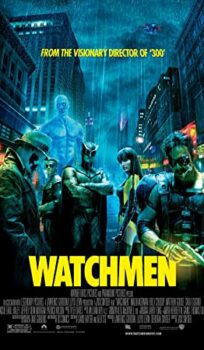