Modern Day:  An elderly Jacob Jankowski (Hal Holbrook) goes to a circus and because he is alone and frail, circus owner Charlie takes him into his trailer while he tries to contact the nursing home from which Jacob walked out of.  Jacob reveals that he worked for a circus when he was a young man and tells his story…

1931:  Jacob’s (Robert Pattinson) parents are killed in an automobile accident the day he is to take his final veterinary exam at Cornell.  Finding out that his parents are broke and their house and business repossessed by the bank, Jacob leaves school and in desperation to start over, jumps onto a circus train.  He is initially put to work doing menial tasks but is later introduced to August (Christoph Waltz), the mercurial circus owner to whom he reveals he is a vet.  August hires him immediately.  Jacob begins to treat the various circus animals and becomes close with August’s wife and star performer, Marlena (Reese Witherspoon).

With the circus in financial crisis, August purchases an elephant named Rosie whom he is convinced will help sell out each performance and bring the circus back to profitability.  Jacob and Marlena bond with the elephant but at her first performance with Marlena riding her, Rosie “misbehaves” causing Marlena to injure herself.  In a rage August beats Rosie and Jacob starts to witness first hand his cruelty.  However through pure luck, Jacob discovers that Rosie understand commands in Polish and realizes that the elephant isn’t misbehaving, she just doesn’t understand.  After Jacob tells August what he’s discovered, they start to train Rosie in Polish and everything seems to be going smoothly.

One evening Marlena throws a celebration for August and his new success but August misinterprets the meeting, thinking there is something going on between Jacob and his wife. He flies into a rage, beating Jacob and hitting Marlena. They escape to a hotel where they admit their true feelings to each other and make love, but August’s men track them down and drag Marlena back to the circus.  Jacob follows and gets back on the train only to find out August redlighted (threw off the train) his two closest friends, Camel and Kinko.

The next day Marlena and Jacob vow to run away together after Marlena’s final performance with Rosie. However, during the performance, several disgruntled circus employees let all the animals out of their cages, causing a stampede.  August catches Marlena as she tries to escape and he attempts to strangle her. Rosie sees what is happening, pulls her stake out of the ground and bludgeons August with it.  The circus closes, Marlena and Jacob leave together, Jacob takes his final veterinary exam and they eventually join Ringling Bros. circus and have five children.

Back to Modern Day: Elderly Jacob reveals that he and Marlena kept Rosie, first when they went to Ringling Bros. and then later when he became the head vet at a zoo. Rosie died at an old age, as did Marlena, and now Jacob is alone in a nursing home. Jacob asks Charlie if he could become the new ticket taker for the circus and Charlie agrees. 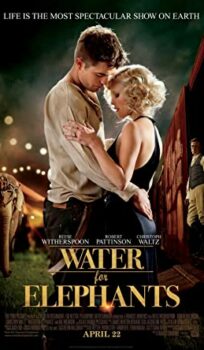