SHORT VERSION:
When Woundwort and his Efrafan rabbits start laying siege to the Watership Down warren, Hazel and a few other rabbits – following a vision of Fiver’s – head to the nearby Nuthanger farm and set the farm dog loose, and then bait it in relay fashion to the warren. Upon arrival, the dog flies into a blood rage, killing most of the Efrafan rabbits and causing the others to retreat. Woundwort himself disappears after confronting the dog. He would never be seen again, but would live on as a boogeyman in rabbit stories. The Watership Down warren is finally safe.

Years later, an elderly Hazel is visited by the spirit of El-ahrairah, who asks him to join his Owsla in return for the warren’s indefinite safety. Hazel accepts, and he falls asleep and peacefully dies. His spirit then follows El-ahrairah to the afterlife.

LONG VERSION:
After Bigwig and his friends free some rabbits (mainly females) from Efrafa, Woundwort and his trackers trail them all to the warren on Watership Down, intending to kill Bigwig and recapture the escapees. They set themselves up at the base of the hill in preparation for a siege. Hazel visits the Efrafans to try to negotiate a truce between the two warrens, but Woundwort refuses to listen.

When the Efrafans start laying siege to the warren, Fiver slips into a trance, and he mentions how he sees “a dog loose in the wood.” Hazel realizes that he must be talking about the dog they earlier encountered at the nearby Nuthanger farm. Inspired by this, he collects a few runners together and they leave the warren for the farm, and he orders Bigwig and the others to hold the Efrafans at bay the best they could until they got back. Woundwort sees them go, but ignores them, his mind set on getting to Bigwig.

Hazel makes it to the farm and chews the dog’s leash off, and the others proceed to bait the dog in relay fashion to Watership Down. Meanwhile, Woundwort breaks into the warren and starts making his way through it, and when he is hit with a surprise attack from Bigwig, the two battle it out. When they momentarily stop, Woundwort asks Bigwig why he won’t give up. Bigwig replies that it is because his chief told him to defend the warren. This stops Woundwort, who knows now that Bigwig is not chief, and he starts to imagine a rabbit bigger than Bigwig in charge of the warren. Just then, the dog shows up, and it flies into a blood rage and starts killing the Efrafan rabbits. Woundwort, hearing their screams, exits the warren and yells for the rabbits that are fleeing to come back and fight, but then the dog spots him. The dog runs to attack him, and Woundwort fearlessly leaps at the dog.

The narrator says that Woundwort’s body was never found, but for years afterward, mother rabbits of the warren would scare their young into obedience by telling them that Woundwort would get them if they didn’t behave.

Years later, the Watership Down warren is thriving, and as a now-elderly Hazel is munching on grass, he is visited by the spirit of El-ahrairah. He invites Hazel to join his Owsla, in return for the warren’s indefinite safety. Hazel accepts, and he falls asleep on the grass and peacefully dies. His spirit then travels with El-ahrairah to the afterlife. 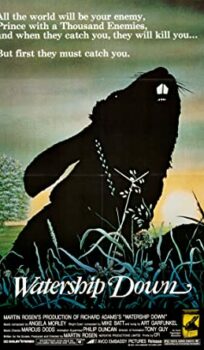