Tom, Curt, Sandra and Randy are junior office workers live in downtown Calgary, where highrise office buildings, apartment buildings, and shopping malls are connected by a network of glass skywalks.  They have bet a month’s salary on who can last the longest without going outside.  A character tells Tom that several office workers have recently committed suicide by breaking an office window with a large bottle of marbles and then jumping out the window.

The movie follows Tom as he’s sent to pick up a $3500 glass vase for his boss’s retirement gift and Curt as he seduces co-worker Vicky upon Tom’s suggestion.  Tom also inadvertently causes a young woman to dump her boyfriend Paul after Tom flippantly tells him that she’s his girlfriend.

Paul, a floral delivery boy, breaks the vase as revenge upon Tom but Tom’s boss unwittingly shoplifts a replacement.  Sandra loses the bet when she runs outside for fresh air, made paranoid about recirculated air by Tom, and Randy also loses the bet after he is forced outside on a work errand. Tom finds his suicidal office mate, Bradley, attempting to break an office window with a bottle full of marbles. Paul then appears to deliver flowers to Tom’s boss for his retirement party.

The final shot is of the jar of marbles dropping from above to shatter at Tom’s feet on the sidewalk. 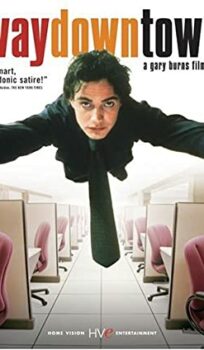