By the end of Saturday night, Bunker (Chip McAllister) has hooked up with Tina (Pamela G. Kay), an aerobics instructor who caught his eye. Paul (D.W. Brown) performs his stand-up routine at the Komedy Kastle, and though his set stinks up the joint, he clicks with fellow newcomer Heidi (Daureen Collodel). Webster’s (Patrick Houser) date with Cindy (Hilary Shapiro) doesn’t go well after he sees that she has become someone who lives life in the fast lane, and she hardly pays any attention to him the whole time. When she takes him back to her place to get physical, he leaves before anything can happen. He returns to the hotel room he and the others are sharing and tells Bunker all about how badly his date went, and he says that he doesn’t know what to expect from women anymore.

On Sunday night, the guys, Tina, and Heidi attend a party at the fitness center where Tina works, and Lester (Peter Ellenstein) meets up with his blind date Tawny (Graem McGavin) there. She turns out to be as nerdy and awkward as he is, so they get along quite well. Webster randomly meets Tawny’s attractive cousin Maxine (Annette Sinclair), whom Lester had tried to set him up with on a blind date earlier that day but he was too downhearted to accept it, and they both approve of what they see and have a very pleasant time together.

On Monday morning, the guys go to the bus station with their women to catch their various buses to their first assignments, and all the couples kiss each other goodbye and make promises to stay in touch in some form. After the ladies leave, the guys acknowledge that this past weekend was a lot of fun, and they part ways as friends. 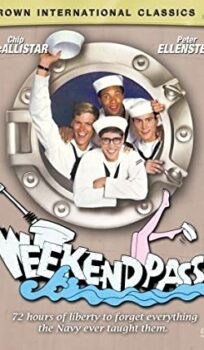